I was watching TV and the dogs needed to go out. When I got up to put them outside a little voice in my head said to bring my phone. On my way out the voice said to check the settings. I checked the settings to make sure I had them right 60 fps and resolution at 3840×2160. I used no digital zoom. I did 2x optical zoom that way there is no digital enhancement. I figured I can enlarge it on my computer. Well, it worked great. The video is about 2:00 minutes long but the object is only seen for about 35-40 seconds. When I zoomed in to the individual frames, I was amazed at what I saw. A glowing sphere with purple, yellow, red, green and blue “flames” coming off it. The “flames” look more like plasma coming off the object. I will post some sequential frames from the video. Remember each picture is 1/60th of a second. You will need to zoom in on the object with whatever program you use to open the picture. Most will let you zoom in really well. I wanted to upload more but you can only do so many. The day before this sighting I saw a triangle craft that had flashing bright white lights. But that’s for another time. There are magnetic anomalies here that I have documented too. I will put video up after it’s been looked at.

A Florida couple was left bewildered after witnessing a cluster of orbs hovering in the night sky.

The strange sighting occurred this past Saturday evening in Daytona Beach as an unidentified man and his wife were standing out on their balcony and noticed something unusual off in the distance.

“We observed lights hovering in the sky, in a V shape formation,” he recalled. He also noted the anomalies “were glowing and would turn off and on, reappearing elsewhere in the sky.”

The confused couple managed to capture footage of the puzzling light show.

The video shows two balls of light in the sky when a third orb briefly joins them to form a triangular shape before the initial pair of illuminated spheres disappear. At one point, a fourth light appears alongside the group. Eventually, the lights seem to drift apart, and the footage ends.

While the man is filming, his wife suggests the UFOs could be related to “something for Memorial Day weekend.”

When reporting the sighting, the man included the following statement, “I am a retired 30-year police officer and have served in two branches of the military. I know what I saw and have never seen anything like this before.”

We sit outside in the afternoons and have a clear view of the planes flying N to S or S to N over the east coast of Florida. Due to Covid, a great number of hours have been spent observing commercial airliners and smaller planes, both jet and prop driven. We are very aware of the shape of the planes and on occasion I have taken photos of the planes when they leave a contrail. My camera is a Nikon P900 with a 24 to 2000 mm rigid mount lens. At 2000 mm, I can read the writing on the commercial airliners and tell which company they belong to.

Today, we both (myself and my fiancé) noticed a bright sparkling light that was moving from SE to NW, which was very different from the reflected sunlight normally seen on high flying airplanes in the afternoon. This was a very bright, intense, light. It passed behind some pine trees and when it emerged into view, I had my camera ready and was only able to get one photo before it vanished from view behind the house. I know that the camera was in focus, as I have taken a number of pictures of high flying planes, but I am at a loss to identify the object that I have photographed.

I am not claiming it to be a UFO, however, I would appreciate if the object could be identified just to slake my curiosity.

Note: The photo was taken with a high quality camera with a telephoto lens. The image has also been digitally enlarged. The camera make and model were verified through the metadata in the photo file.

My family and I were on vacation in Miami in July 2021, we stayed at a hotel on the beach. On 07/01/21 around 12 am we were out side on the balcony, on the 24th floor looking out at the ocean. We noticed bright light in the distant night sky. I pulled out my phone and started to record, I zoomed in 10x and noticed a triangular shaped object in multi colors, like rainbow road from Mario. It stayed in relatively same place but it looked as if it was continously changing shapes. We saw air plans flying around it and knew that this was not an airplane. We also from my sisters phone pulled up a star app that you can point at stars in the sky and the app would tell you what star it was and what constellation it was apart of. We found may stars and constellations around thos light. When we pointed at the light using the app noting would come up. Myself and my family all saw this. 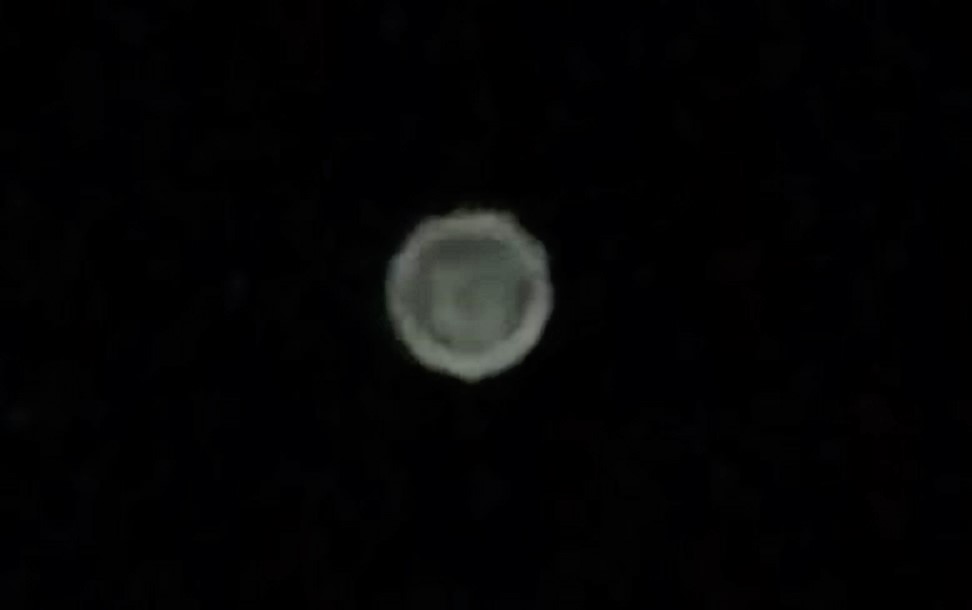 Ok…for the last two weeks, Miami is being inundated w/UFO’s and many nights we see Coast Guard choppers and helicopters, with no lights, buzzing the UFO’s, boats in Biscayne bay w/no lights and I’ve heard military jets multiple times.  I live on 33rd floor of a Miami high rise and look straight north over Biscayne Bay with unobstructed views. Starting two weeks or so ago we started seeing whitish orbs basically popping up in the sky out of nowhere. For the past few days, they are popping up further north and sometimes northeast over ocean and moving very slowly to about 150th to 41st north and the middle of Biscayne bay. They then hover for 5 to 30 minutes at an altitude of approximately 2-4 thousand feet moving occasionally up, or in other directions when commercial aircraft are coming their direction then going stationary again. 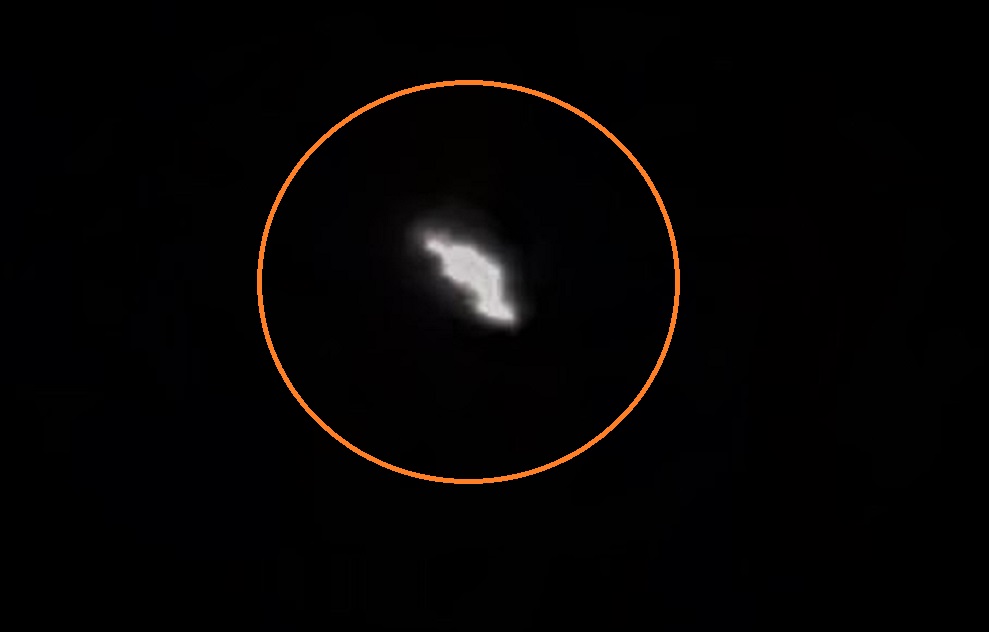 When they move out of view they start moving from hovering position to the west towards the city or south over my building and climbing sometimes very high then out of view. I have a ton of video and still shots showing this and from directly underneath. From underneath, they show different structural make up. Maybe 3 or 4 different types Disc, tube, boomerang, and some other shape I cannot discern. NEVER, never do any make a sound…completely silent. They only come out at dusk and continue throughout the night. These are not lanterns as they hover then move in different directions other than with the wind and at times zigzag out of commercial traffic’s way. Not drones either. Whatever is going on is the real deal and needs to be investigated immediately!! 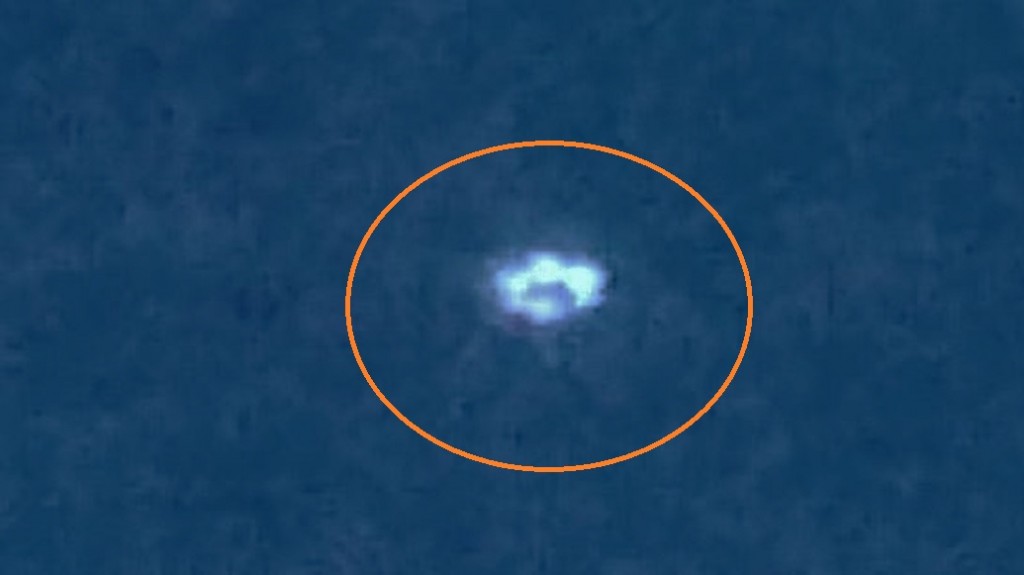 MANY WITNESSES TO AN ALIEN CRAFT OVER DAYTONA BEACH

Witness report: Saturn like object hovering 1 mile away. Bright blinking colored lights. Hovered then turned south and moved away slowly then VERY fast.   My wife and I were at a hotel on the beach in Daytona Beach Florida on 7/20/16. The hotel is on SR A1A about 2.0 miles south of US 92. The time was 8:52 PM and it had just turned dark.  We were sitting in the lawn area overlooking the ocean when we heard several people in a parking lot next to us to the south speaking loudly and pointing to a blinking object in the sky. The object was about ½ mile south of our position, at about a 30–45 degree angle from our position, hovering over the beach at maybe 500’ (?). From our position it looked small maybe about the size of a penny held at arm’s length.  It looked like a sphere with a ring around it, kind of like the planet Saturn. It had a lot of lights on it many different colors. Very bright white/silver, green maybe others, not sure. The white/silver lights were constant and there were others blinking. There was a violet one on the bottom that blinked a lot slower than the others, maybe once every second. The others were faster.  The object hovered for about a minute that we observed. It then slowly turned west then south arcing slightly as it did. It then headed south slowly then VERY quickly picked up speed and continued south down the beach until we lost sight of it.  My wife noted there was a small plane approaching the object from the north and when the plane got really close, the object turned and quickly sped away. As my wife said “it hauled butt”.  I had difficulty getting my phone camera to focus in the dark but managed to snap one picture as soon as I saw it, then started video recording for 30 seconds or so. I turned off video so I could snap another picture. When I turned it off the object had started its turn. I turned the video back on until I lost sight of it.  We are not sure what this was. It was definitely not a plane or helicopter. It couldn’t have been a drone as the drone would have to have been a big one, at least 10-15 feet in diameter. No other logical explanation to what we saw.