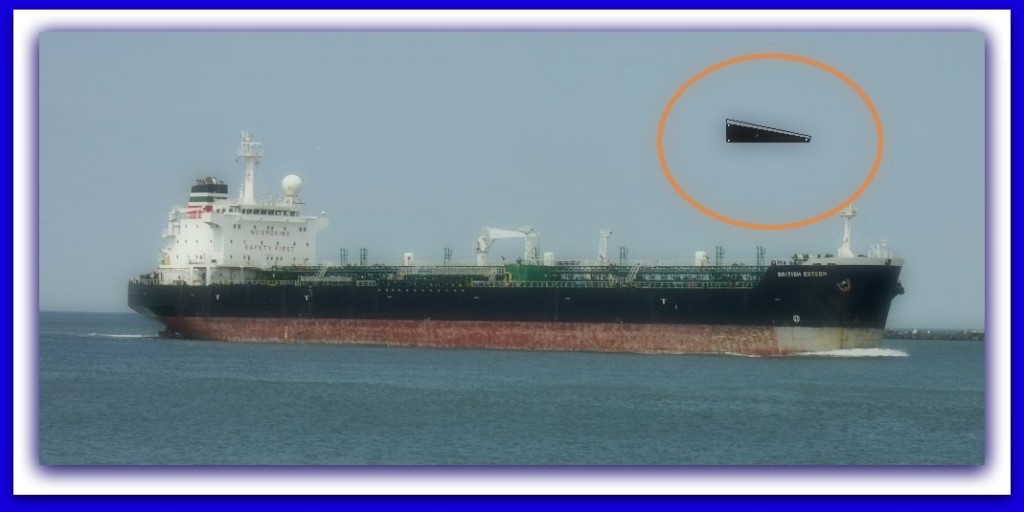 THREE DAY ALIEN CRAFT ENCOUNTER IN THE GULF OF MEXICO

Although Arrowhead UFOs are not the most common of UFO shapes sighted, this sighting was even more unusual because of its duration. The craft was seen by the entire crew of the Oil Tanker “British Grenadier” for exactly 3 days!  The event occurred around April/May 1969 while the “British Grenadier” was sailing through the Gulf of Mexico. The UFO appeared directly above the ship at exactly noon on the first day. It just seemed to appear as nobody saw it arrive and it remained above the ship for the next 3 days.  According to reports the craft was approximately 1 mile above the ship and dark blue in colour during the day. At night it appeared as a silvery light. The weather conditions were good at the time, with a clear sky and calm seas.  On the first day of its arrival (one minute after midnight), the ships engines suddenly stopped and only emergency lighting and steering were available. The crew managed to restart the engines, which took some time as all the pumps had to be shut down and restarted manually.  The second day saw all the food storage refrigerators closed down and no reason for this event could be found.  On the third day at 11.45 pm one of the crew noticed that the lights were out in the ships air conditioning room and a door leading to the crews accomodation was opened. The engineer passed through the door to investigate and spoke to two firemen. But the next day the same door was found welded shut! Apparently, the door had been welded before the ship left dock (because of a fault), but the door was definitely open for the engineer to have walked through it.  A few minutes after this event the engines stopped again, leaving just emergency lighting and steering (again one minute after midnight!). They were restarted once more, but later it was discovered that the starter motor for the emergency diesel generator had been dismantled. All the parts of the generator were neatly placed by the machine as if someone had examined it.  At exactly noon on the third day the craft vanished in the same manner as it had appeared.  Although all these events were recorded in the ships log, this is the first time (to our knowledge) that this event has been published. We would be interested in hearing from any of the crew that were aboard the BP Oil Tanker “British Grenadier” at this time, in order to obtain more information about this sighting.  NOTE: The above image is a rendering.