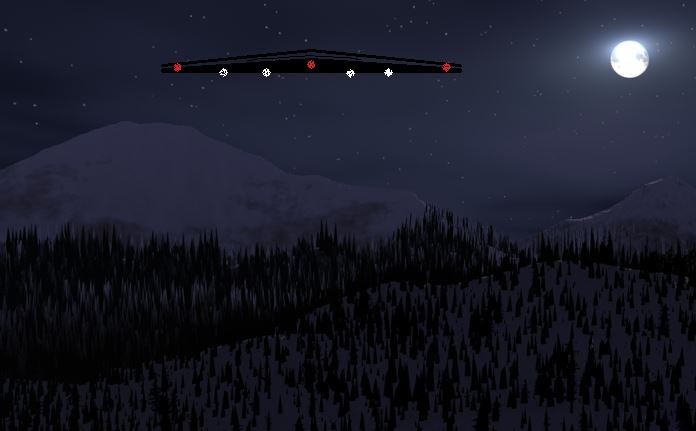 20 minute large triangle no lights no noise only pulsing/pressure then segmented.

Camping in wilderness 10 miles NW of Idaho City, ID., sleeping in tent in sleeping bag. At 1:17 am I woke up, feeling pressure pulsing sensation no noise just pressure. Weather was clear and in the high 40’s.  I exited the tent to find out what was causing the pulsing pressure sensations. I looked all over the small valley and saw nothing. It was dark but the moon was pretty bright almost full I was suspecting a earthquake, but then I noticed that there were no stars visible in the sky above the valley, and the moon was visible through the break in the trees to my left. I could see stars all around the valley sky except for the area along Elk Creek where I was camped. The entire valley was in a shadow and the starlight was being blocked.  I could not make out by what as the object was so large that its span reached from the top of the hill on my left to the top of the hill on my right a distance of about 1500 feet, and may have reached further. I could not detect its shape until it stopped pulsing and started to lift up then I could tell its shape.  It was dark no lights no visible windows or ports, while it was pulsing it was about 2000 feet above the forest, it rose without a sound to about 5 to 6 thousand feet about me, then segmented into several identical shapes and was gone. I waited for several more minutes but nothing else appeared. The entire episode lasted about 20 minutes.  Observer is a retired US Navy Radar operator. Also worked as Civilian Radar ATC for US Air Force.

((NUFORC Note: We spoke via telephone with the source of the report, and he was very convincing about his sighting. We suspect that he is a very high-quality witness…very serious-minded. PD))