Description (In Witness’s Own Words): The emotional experience of my abduction never stops. We were taken onboard & released the morning after. I did report the abduction to the authorities & what a mistake that was. I did go to a local hospital for a checkup as my nose was bleeding and the whites of my eyes were deep orange and my lungs ached when breathing. I was very concerned about all of this & then when the nurse read my height measurement as being 5’09”, I told her that she was incorrect as I am over 5’10” & she rechecked the scale & told me again 5’09”. When my brother & I arrived home & our mom had seen us, first she wanted to know were we both had been & then she yelled at us saying “What happened??? You both have shrunk what is wrong with your eyes???. At this point I ran to the bathroom mirror and saw that I did not look right. I showed the authorities my 18th birthday photo taken about two weeks before our abduction & told them to examine my high school medical records for my physical size & please make out the comparison between then and how I am now (at the time) and I asked them how many 18 year olds lose an inch overnight? I may not recall exactly everything today of the experience, however I still retain enough memory about it.

Second Report (In Witness’s Own Words): Thanks for writing. I forwarded a copy of your letter to my brother S. (name abbreviated to protect anonymity of witness). I will do my best to recall everything. First of all, we were all in our teen years during this experience. We had seen unconventional flying objects before 1973, but this one really got our attention.The location can be viewed at: http://www.shaker.lib.me.us/. Just north passed area #4 is where we were abducted at the intersection of route #26 & Outlet road & Shaker Village road which was later renamed Quarry road.We at first had been followed by a UFO along side the driver’s side for several miles towards Middle Range pond & took a sharp left at this point and we proceeded to head towards Oxford, Me.We turned around by the Oxford Plains Speedway & headed back the same way we had came.The extra strange stuff began when we reached the Apple orchard by the intersections I have already afore mentioned.We noticed that all traffic had ceased on this usually busy & well travelled road and it the sun had gone down awfully fast & now the stars appeared & were HUGE as if I could reach out to them. We noticed the usual cricket sounds for this area were missing and I could feel & hear my heart beating in my ears as it seemed like we were inside a vacuumed bottle, all we could hear is us talking to each other & all the usual outside noises were silenced. We saw the UFO all of a sudden hovering by a tree that to this day still is the only tree seated just in front of the apple orchard.This UFO was big & round & lit up orange & totally quiet & we all just stared at it for what we thought at the time was just about one hour. On our way back home it became daylight way too soon & I asked my friend & owner & driver of the 1967 Tan Chevy Nova we all road in to head towards the Auburn, police department as I wanted to inform the police of this event. We were about to encounter more strange stuff in which much later on had proved to be very significant. I will close my letter to you at this time & will continue to write on this experience each night as I can as the day time is very busy for me. So long for now.

Investigator’s Notes: 1973 was a “wave year” for close encounters and UFO reports. Perhaps this case is another one of the many in that time period. The experience must have been traumatic for the witness given that he vividly remembers details of the experience. The witness is trying to get in touch with his brother who also experienced the abduction. Any updates to this case will be posted. NOTE: The above image is CGI. 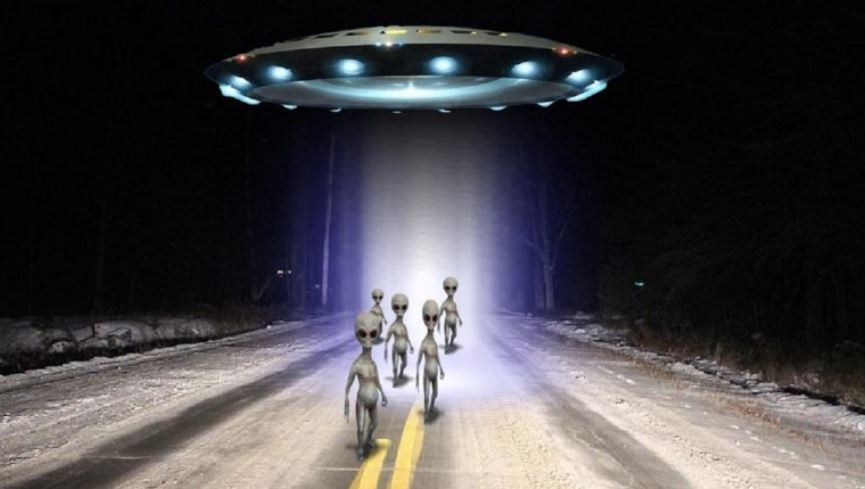 An Object “As Big As A Football Field!”

It was coming up on 3 am in the early hours of 27th October 1975 when twenty-two-year-old, David Stevens, and his friend, Glen Gray, were driving along a quiet road in the countryside, just outside Oxford, Maine. Theirs was the only vehicle on the road, their lone headlights cutting through the thick darkness of night in front of them. That was until a brightly lit UFO “as big as a football field” filled their sights.  The strange object would head straight for their car, maintaining a position directly over their moving vehicle for several moments. Then, a beam of light shot from the behemoth-like craft and hit them. The vehicle immediately went into a sideways skid, coming to a stop around fifteen feet further down the road.  Each man must have blacked out as the next thing they knew they awoke in the stationary vehicle and several hours had passed. They returned home, confused, and both aware that something very much out of the ordinary had just happened to them. However, it would be several weeks before Stephens would see a doctor and undergo hypnotic regression to unlock the missing hours following the blinding light incapacitating their car. When he listened to the hypnosis sessions back, his mind was flooded with the disturbing events on the lonely road near Maine.  Incidentally, subsequent investigations would reveal a corroborating witness of sorts. Although they didn’t see the incident involving Stephens, a police officer would report a similar UFO at the same time and in the same area. It is highly likely he witnessed the same object David Stephens claims he saw. And went aboard.

“Taken” To The Back Roads

Although the men had seemingly blocked them out of their minds, the strange events appeared to begin before they spotted the huge, brightly lit object. At around 2:30 am, while heading towards Lake Thompson, their car suddenly came under some “outside control”. The pair would find themselves on the “back road” to Oxford. However, the car appeared to be “elevated off the road”. Stephens would recall the pair “went around a curve and suddenly saw these colored lights” in front of them. They were only visible for a few seconds before “two big bright lights” filled all points of their vision.  The next memory Stephens has is of “looking down on the car” from the window of a strange room. Then, he noticed a strange creature enter the room. He would describe this strange being as around four-and-a-half feet tall with extremely pale skin. Perhaps strangest of all was the mushroom-shape of its head. There were two eyes without eyebrows, and in place of a nose were “two dots”. Around his body was “a sheet or a robe”.  A message sounded inside his head to not be afraid, suggesting to investigators, telepathic communication. The creature then guided Stephens to a different room, in which there were several other figures the same as the first. The room had a distinct medical-type feel to it, including what appeared to be an operating table on which he was told to get on to. Once there, samples of his blood were taken. When he was asked to undress, instead of complying, he took his chance and lashed out, hitting one of the creatures.

Although the action on Stephens’ part did cause the creatures to back away from the table slightly, they merely persisted that he would not be harmed, and asked him to undress for examination. Eventually, the surreal nature of the experience already weakening any resolve he might have, Stephens did as they requested.  The next thing he knew, a large device with an arm like an X-ray machine was moving over him. As the device was moved over the entirety of his body, a distinct “clicking” sound rang out. They would retrieve samples of his hair and even of fingernail clippings. These would go into some kind of strange-looking tubes.  He was then asked to redress, which he did, immediately realizing he was suddenly in another room, again looking out of a window. Then his memory appeared to “fast-forward” once more as he was suddenly back in the driver’s seat of his car, with Glen in the passenger seat beside him. Both were just coming to, and the vehicle was still in the middle of the lonely road in its sideways position. Even more unnerving, however – the large craft remained over them.  Stephens quickly started the engine and pulled away from the scene. They would go as far as the town of Poland when the strange object finally disappeared from sight. A short time later, they turned the car around to head back towards Oxford. Not long after doing so, though, the car once again came under the control of an external force. The pair would find themselves on a dark lane, overlooking Tripp Pond. That was when the engine cut out, and a large craft appeared in front of them.

The Second Sighting – The “Mothership”

The craft was no more than 300-feet from the roof of the car. As they looked in awe at the unbelievable display above them, each also noticed two smaller crafts emerge from the water. They would rise high before diving towards the water again. They would repeat this several times before they, along with the main craft hovering over the crippled car shot into the air and disappeared. The encounter had lasted around twenty minutes. By the time they restarted the car and set off to Stephens’ parent’s home, the sky above them was beginning to lighten. A look at the clock revealed it to be after 7 am.  The two young men went straight to bed after arriving home, determined to keep the encounter to themselves lest “everyone’d think we were nuts”. However, shortly after arriving back, both began to feel extremely ill. Stephens would recall how they “felt like we were in a daze”, and of feeling as though he “couldn’t walk, see straight or hardly even talk”.  When Stephens’ mother examined the young men she would find “their hands and feet swollen” with both men sweating yet complaining of feeling intense cold. Despite them doubling their layers, “I couldn’t keep them warm enough” she would recall.  By the end of the day – around twelve hours after the incident – they began to feel somewhat better. However, both wouldn’t feel back to full health for several days.  NOTE: The above image is CGI.