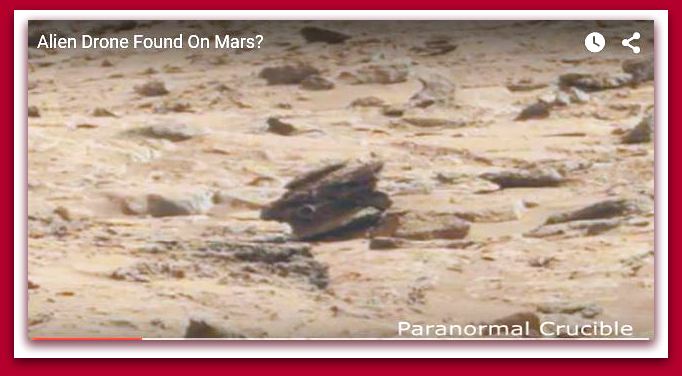 An image from the Mars Rover looks like a drone (Photo: YouTube/Paranormal Crucible)…

An image captured by NASA’s Mars Curiosity Rover appears to be a crashed drone that could have been piloted by Martians.  The object captured by the Mars Rover appears to be a rock in the original NASA photo, Metro reports. However, when the image is enhanced and processed with the help of photo editing software, it looks like a metal drone.  UFO Sightings Daily added an update about the image Monday. The website says their team has actually been studying the image for several years, but the new enhanced image gives them a much better view at it.  The enhanced image can be credited to YouTube user Paranormal Crucible. Scott Waring of UFO Sightings Daily commented on Paranormal Crucible’s image:  “Of course Paranormal Crucible is correct. He thinks this object looks like a drone, and that is an assumption we made several years ago when finding it, but I really like his cleaned up photo of the object and his new perspective. It gives us a chance to look at it as it was when it was made, and how it might have been used.”  Paranormal Crucible is convinced that the object in the image was created by aliens.  “The anomaly which appears to be the result of intelligent design was photographed by the rover as it surveyed the area around rock nest at Gale Crater. In my opinion this object is an extraterrestrial drone possibly built by the indigenous Martian populace or perhaps it was deployed by an off world alien species who were exploring the Martian surface. This object was found a few years back, but I will be revisiting some old discoveries and shedding new light on what they could actually be.”