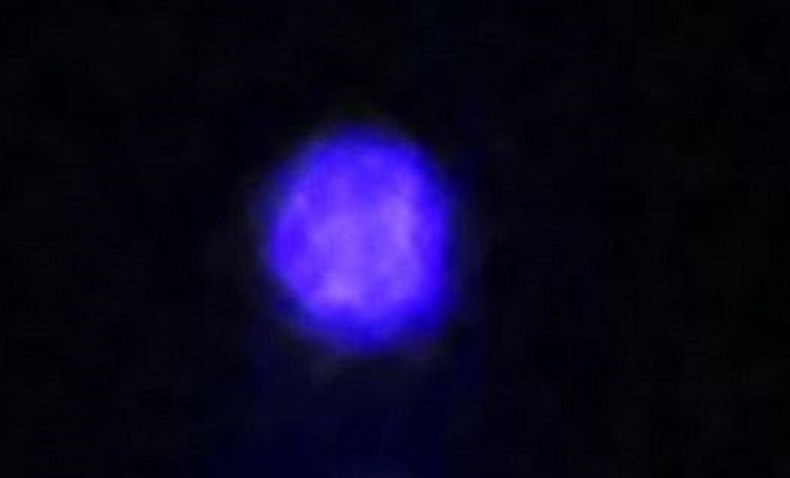 On the night of 5/27/16, between the times of 11:05 and 11:11 pm, my co-worker called me out of the home we work at to point out a weird object flying in the sky that was traveling from the west, headed east, and finally came to rest positioned somewhere over or near Selfridge Air Force base.  When the object first appeared it was very blue and very brightly illuminated, the lights weren’t flickering or dimming like in typical aircraft. This was not like any star or planet I have ever seen in the sky before. The object was slightly bigger in appearance than the North Star, and emitted no sounds, and moved very smoothly, until it came to a complete stop northeast of where we were looking and positioned.  When the object came to a stop about 3 to 4 smaller orb like blue lights came out of the bottom of the object and hovered there for about 1 minute, before the orbs disappeared back into the object and the object turned solid bright vibrant red. The object remained still in the sky for about another 2 minutes, and then started to lower itself to the ground. It continued to descend to the ground while remaining bright solid red, until it disappeared out of our visual field. The whole time the object remained the same size and the lights were always visible to my coworker and me. This event lasted a total of 6 minutes.

The house we are located at is in Eastpointe, Michigan, at 9 Mile Rd., just west of Hayes. The object was viewed moving just north of us, probably about 8-10 miles away, towards the Harrison Township/Mount Clemens area. This is the approximate location that Selfridge Air Force Base is situated compared to where we are. The weather is clear and cloud cover is almost none. It is not raining and there are hardly any stars visible, so this object really stuck out.  I am not sure the altitude of the object but I do know that while my co-worker and I were viewing this event, the object was positioned between two telephone poles, and was about 3 feet above the wire that crosses between the poles. My best guess would be that this object was flying at the elevation of about 20,000 feet to 25,000 feet in the air. It wasn’t as high as a plane would normally be seen flying.  My co-worker attempted to get video footage while this whole thing was happening. We don’t know if the video came out, or is clear, because it was taken on his smart phone, and the screen is small and marred from overuse. I am working on transferring the video from his phone to my computer to see it we can upload it to get a better look to see if we were able to catch is even on film.

((NUFORC Note: We spoke via telephone with the witness, and she sounded to us to be quite serious-minded. We suspect that she is an excellent witness. She works in the field of medicine. PD))