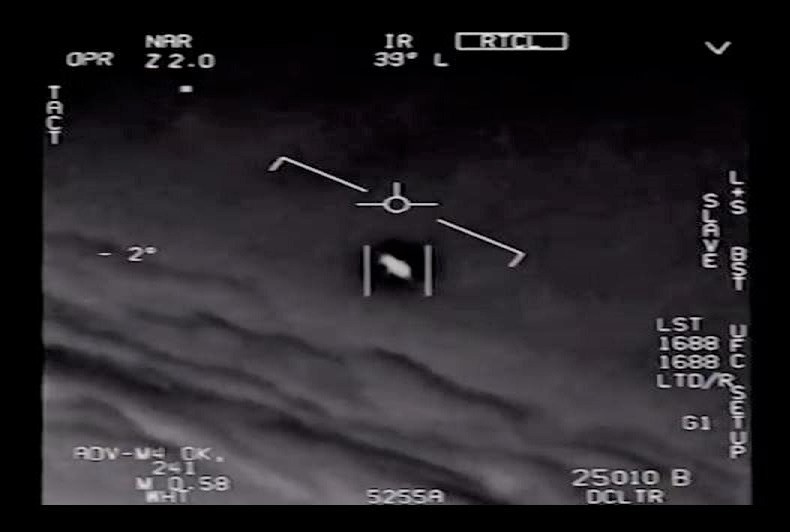 NOVEMBER 2004 ……..OVER THE PACIFIC NEAR CALIFORNIA

Close encounters of pilots are among the most reliable testimonies about the presence of UFOs in our skies, and some of the most incredible accounts of UFO sightings come from pilots who spent thousands of hours in the air.  This is because pilots are highly trained to differentiate and evaluate what they see in their field of work.  Recently, the prestigious newspaper The New York Times published an interview in which the crew of two fighter-bombers F-18 Hornet of the United States Navy recounted a strange chapter that occurred in 2004, in which they saw what seemed to be an unusual flying craft, they could not identify.

Officers David Fravor and Jim Slaight were on a training mission over the Pacific, about 160 kilometers from the coast when they received a radio message on their F / A-18F Super Hornet fighter-bomber.  A USS Princeton cruise officer asked them if the plane carried weapons on board.  “Two CATM-9s,” Fravor responded, referring to referring to dummy missiles that could not be fired.  Clearly, no one expected that in the middle of November 2004 there would be a threat off the coasts of California.  As noted by the New York Times, and as we can see in the video, Fravor recalled the words of the radio operator that came later:  “Well, we have a vector for you.”  Curiously, the USS Princeton had been following a strange contact for two weeks, consisting of what appeared to be several ‘objects’ that suddenly appeared at high altitude, about 24,000 meters, and then launched into the sea, stopping and hovering about six kilometers from the water.

.
After that, the contacts disappeared from the radar without a clear explanation.
Fravor and Slaight tried to investigate the contact, so they turned towards finding the Unidentified Flying Object.  When the control informed them that they were already in position, they discovered that there was nothing in sight or within reach of the F-18’s radar.  Then, Fravor relates that below, an oval object appeared leaving a trail behind it. The object measured about 12 meters and seemed to fly up and down erratically, without moving in a particular direction.  It had a whitish appearance reminiscent of foam or boiling water, the pilot recalls.  Cautious, the crew of the fighter-bomber began a gentle descent towards the object. But, suddenly, the “thing” began to ascend towards them, so Fravor decided to start a direct descent towards the UFO.  But then, the object abandoned its trajectory.  “It accelerated like nothing I’ve seen,” says Fravor in the interview. As he remembers, he was “quite overwhelmed.”

.
After losing contact, the USS Princeton gave them a meeting point, called the cap point, in aviation parlance, almost 100 kilometers away.  While in-route, the Princeton radioed again.  Radar had again picked up the strange aircraft once again.  “Sir, you won’t believe it,” the radio operator said, “but that thing is at your cap point.”  According to Fravor, the object had taken less than a minute to travel 100 kilometers.  This raises the question of what type of ‘aircraft’ can outperform an F18, and travel at such speeds as if the laws of aerodynamics had no influence whatsoever over it?  When they reached the point, there was no sign of the UFO, so Fravor and Slaight returned to the aircraft carrier they had left, the USS Nimitz.  According to the pilots, their superiors did not open an investigation to study what happened, but his fellow pilots soon laughed at him when they learned of the strange encounter.  When a colleague asked Fravor what he had seen that day, he replied:  “I have no idea. It had no feathers, wings or rotors and was much faster than our F-18.”  He added: “I want to fly one.”

.
Does this  statement from the pilots suggest the UFO presence is real? And that we are being visited, contacted and monitored by entities, not from Earth? According to millions of people around the globe, this video, in addition to countless other materials is the ultimate proof that Alien spacecraft have been visiting our planet for decades.  Maybe, after all, UFO disclosure is near.