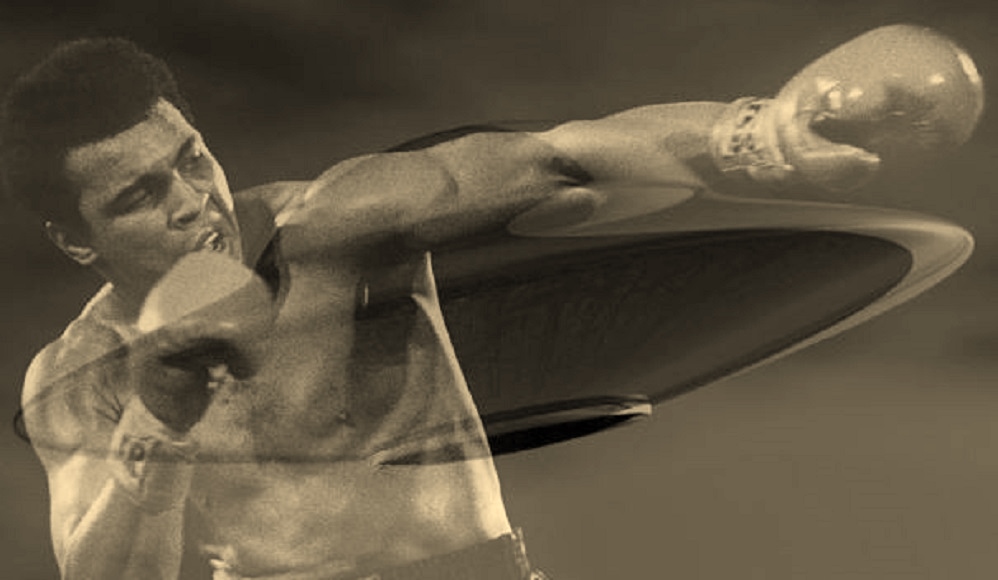 MUHAMMAD ALI ……….UFO BELIEVER AND WITNESS TO MANY SIGHTINGS

The legend in the sport of boxing, Muhammad Ali, was a UFO believer who claimed to have had encounters with the mysterious visitors from other planets.  Author and UFO expert Timothy Green Beckley had many alien encounters with the boxing icon up to the early 1990s.  Ali even said that he had witnessed a strange activity involving massive UFO mothership and went on to say that extraterrestrial visitations were “of tremendous importance to the whole world.”  In a tribute to the legendary boxer and civil rights activist, Mr Beckley explored Ali’s thoughts on UFOs. In his book “Amazing Flying Saucer Experiences of Celebrities, Rock Stars and the Rich and Famous,” published in 2015, Mr Beckley said that of all the people who talked about UFOs and extraterrestrial theories, no one more knowledgeable than the heavyweight boxing champ Muhammad Ali.  Mr Beckley revealed that he had four meetings with Ali when they discussed alien topics. The first one happened in the boxer’s home in Cherry Hill, New Jersey, which the author described it as more like a Holiday Inn hotel than somebody’s residence.  In his book, he wrote that the knockout artist had been working out on previous mornings in the park and had made the headlines when he claimed that he had seen two UFOs moving over New York City in the park and his home.  Ali apparently told him he often look up before dawn while running and during that time, he saw the first bright UFO hovering as if hanging by an invisible thread.  The second UFO was reportedly spotted with a glowing red trail behind. Ali then called the attention of his trainer, and they watched the two mysterious aerial objects, which moved slowly across the sky for about 15 minutes. The best Ali could describe the incredible event was just round and big.  Ali further told the author that he found out later there were other UFO sighting reports on the same night, including one from a pilot who was about to land at Newark Airport.  Ali also revealed to Beckley that he had seen several UFOs many times before, a total of 16 sightings to the date of their conversations.  When the author was about to bid goodbye, Ali waved him over and said he would not mind talking further.  The author indicated in his book Ali claimed that UFOs “had been watching him” for some time. Ali reportedly said to him that he had seen UFOs playing tag between the stars many times in the early morning hours.  On the second meeting, he showed a video of UFOs to Ali, and the boxing champion pointed out characteristics of flying saucers in the video like the ones similar to what he observed in real life.  During their third meeting, Mr Beckley took with him Israeli psychic Uri Geller to Ali’s training camp in the Pocono Mountains of Pennsylvania at Dear Lake. However, Ali apparently returned to the UFO topics, which he appeared to be more comfortable than talking about psychic phenomena.  The author had one final formal meeting with Ali about UFOs where the legend had said that he always speak his mind because he discovered that many other people have had similar sightings. Ali was hoping that others will listen in the future as he was convinced UFOs are critical to the entire world.