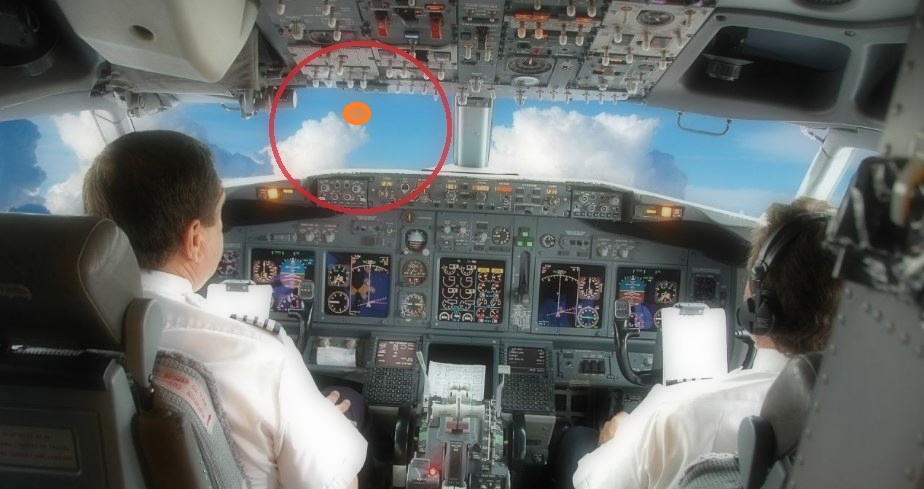 PILOT AND CO-PILOT SPOT A UFO AT 35,000 FEET
.
NOVEMBER 3, 2004   …………..  SAN FRANCISCO CALIFORNIA
.
The following UFO account was made by an airline pilot with 14 years of experience, and has a high degree of believe-ability. On the night of November 3, 2004, at 11:00 PM, a commercial pilot was making his approach for landing into San Francisco.  He had received instructions from the tower to descend from his altitude of 35,000 to 24,000, when something unusual happened.  The pilot’s attention was drawn to an orange glow, which seemed to flash to his west. The light would sometimes glow white, then back to orange. He thought at first he might be seeing a planet.

“While approaching San Francisco from the east, an orange dot began to glow and seemed to flash higher up to the west of us. I thought that it was a planet. It then changed color from orange to white. Again, I thought a planet could be illuminated through a (local) atmosphere that would explain the color change.”  Then the unknown light source began to move toward the northeast. Being aware that the movements of his airliner could cause the appearance of the light’s movements, he found some stars to use as a reference point. This verified that the unknown glowing source was indeed moving northeasterly.

“It moved about 30 degrees and then stopped. Then, it made a slight tangent to the right and continued moving for about 20 more degrees. It stopped and turned again to the right and continued for 10 degrees, then stopped again and disappeared.”  The pilot also related that the entire event was no more than two minutes in length. It was very difficult to determine the exact distance away from the plane that the object was, but the UFO appeared from his perspective to be the size of a star.

The pilot added:  “We had initially been at 35,000 feet (10,500 meters) but had descended to 24,000 feet (7,200 meters) when we saw the object. We were above the clouds with a clear view, and there was a crescent moon behind us. The weather in San Francisco was partly cloudy skies and light rain.”  The pilot’s observations were corroborated by his co-pilot, who attested to the exact same occurrence. Both of the crewmen were in awe at what they had seen, and could offer no “earthly” explanation for what the unusual lights were that night.  Neither pilot had ever seen anything like they witnessed as they landed in San Francisco on November 3, 2004.  NOTE: The above image is a rendering.