LIGHT ORB UFO CLOSE ENCOUNTER IN CALIFORNIA
.
OCTOBER 11, 2000  …………..  WHITTIER CALIFRORNIA
.
I looked up into the trees and observed intense white beams of light piercing through the branches of the trees every chance they could. The light was intense and occasionally I would need to squint because of the brightness. I was frozen as my mind was unable to explain the sudden appearance of the light seemingly out of nowhere. As I continued to peer up at the tree and the light, I could tell that the light source was of course above the trees and was slowly moving in a southerly direction from the mountainside. The light was so bright I couldn’t accurately tell what the height of the light source was or what object or vessel was emitting the light. All I could tell was that it was moving slowly southbound and it was directly over my house now. If I had to estimate the light sources height I would have to say less than 250- 300 feet. Less than a football field would be my most educated guess.  The light continued to move slowly southbound at what appeared to be approximately 5-7 mph at best. The light was now directly over the middle of the street and the light beams continued to shine through the trees branches down onto the street. I remember looking down at the street again to marvel at the brightness of said light. I took several steps forward keeping the light source in my vision at all times. I found myself not under the protection of the trees any longer. I was now in open space in the middle of my street almost directly in front of my house. The residence directly across the street does not have a fichus tree in the front yard and this allows an unimpaired view of the sky looking southbound. The light source was now more or less over the house directly across the street from my residence.  There was no sound emitting from the slow moving light source. No chopping of blades such as you would hear from a helicopter. There was no jet engine or propulsion noise present. There was no green or red aviation flight lights present as well. The light source was too low to the ground to be any craft I have ever seen. Suddenly the light accelerated forward and parallel to a speed I can only describe 10-15 times faster than that of a meteor racing downward and across the sky heading entering our atmosphere.

The light source traveled an immense length air space in less than one second. If I had to estimate the distance it traveled I would have to say approximately 30-40 miles in the previously described one second of time. At the time of its parallel acceleration not a sound was emitted from the light source, It remained absolutely silent in its forward motion and the light became smaller in size almost instantly. The light source size was that of a grape from the position I continued to observe it from.  Then the light source took a vertical trajectory, comparable to a child sliding “up” not down a slide. The light source during this upward trajectory increased speed and was traveling even faster than it had during its initial parallel acceleration. The size of the light source at its last visible observation as it turned upward was now that of a small pea. Suddenly it was gone, simply disappearing out of sight and, what I believe to be, out of our atmosphere.  I was unable to move, I was frozen staring at the area of the sky where the light source once was. My heart was beating fast and loud. I felt sick to my stomach. I had no idea what I had just witnessed but I knew in my heart that there was no way that source of that light was from anything on this earth. The speed was greater than anything we as a civilization can possibly have at our disposal.  I walked up to the front door of my house and my wife opened the door. She had the portable phone to her ear and was on hold with the power company. She slowly removed the phone from her ear dropping it down to her side. She was looking at me with a facial expression of concern. She said “What’s wrong with you, you look like you seen a ghost?” I stared at her without saying a word. She said “Your pale, get in the house, what’s wrong?” My response was “I just saw a UFO. I can’t explain what I just saw.” I asked her if she had seen the light over the house and she advised that she had not and that she had been in the den on hold with the power company. It was then that the power company employee came on the line and advised my wife that there was a small pocket of outage in our area. My wife asked her if she knew why and the operator advised that she wasn’t sure why. My wife asked how long before the power would be back on and the employee stated “We need to find something wrong before we can fix it and right now we don’t show any blown transformers or downed power lines.” My wife hung up the phone and not 5-10 seconds later the power came back on causing us to jump. I explained to her what I had observed outside our home and reiterated that when I got to the door on my way back that I looked shaken.  The events depicted above are absolutely true and accurate. I have told a few friends and family members of the facts surrounding the events described above but have neglected to officially report said incident. I am reporting the incident now so that the occurrence can be documented for possible future reference. – MUFON CMS  NOTE: The above image is from a trail camera in New York state –September 2, 2009 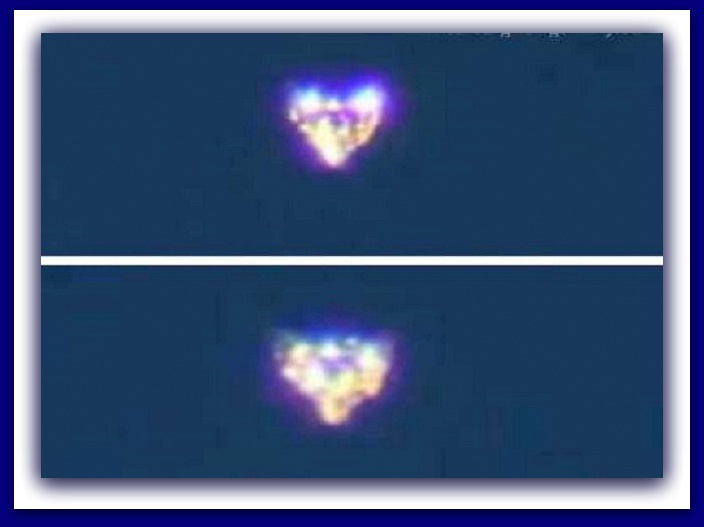 I took out the Sunday night trash at 11 pm and smoked my cigarette at the entrance to my garage when all of a sudden I noticed a diamond shaped craft seemingly jump out of the sky/stars and pulsate in the night sky.  I immediately felt extremely uncomfortable and thought maybe I caught the tail end of a very bright shooting star as the craft disappeared, but within 10-15 seconds it reappeared even closer for about 8-10 seconds and grew much larger before skimming up towards the sky even higher.  The craft seemed to look like the North Star every time it would pulsate/vibrate to a stop before totally disappearing. Then every 10-20 seconds it would reappear in a vibrating/pulsating bright glow and literally seemed to be mimicking the North Star every time it stopped.  It is an absolutely crystal clear night tonight and this experience just occurred a little over an hour ago. It seemed to be super high in the sky, like it was outside the atmosphere and as far away as the stars but it would appear very close at the same time.  The craft appeared to be gigantic, diamond in shape that would glow with a vibrating white circular center and white edges that would become almost transparent.  The entire event took about 3-5 minutes to completely dodge above my roof/house and be out of sight. I felt extremely uncomfortable and still feel uncomfortable and shocked with goose bumps as I type this. During the experience, I saw a second object that mimicked the main object briefly before darting across the sky faster than anything I have ever seen.

Both objects moved quickly and slowly but faster than anything I have ever seen when they moved around the sky at high rates of speed. I did not see any of the typical man made objects in the sky (planes, satellites, helicopters,) during the experience, but did see them on their normal paths a few mins after the experience ended.  I held my hand at during the experience to block the only light in my neighborhood that was on to make sure I had the best view possible and when the second object appeared my hand felt warm like I was holding it up to a distant fire or welders torch. I have never seen anything remotely like these objects in my entire 30 years and never felt the way I felt during this experience in my entire life.  I still feel very uncomfortable and awkwyrd. I thought that there had to be an explanation and looked up online what did I just see in the night sky? The space station website showed up and I filled out the information on my location and time and it was nowhere near me.  I could not find one video online that even resembled what I saw and experienced and I felt overwhelmingly compelled to somehow report this experience. I work in a Church and want to remain anonymous but had to share my experience. Please offer any help, explanation, or insight that you can if possible.  Thank you for your time.  NOTE: The above image is a rendering. 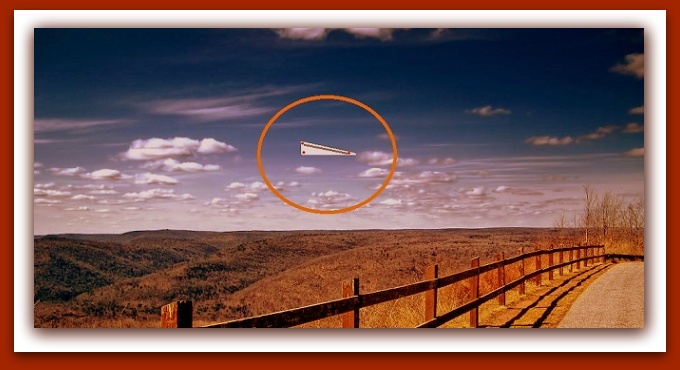 On Sunday October 11, 2015 it was a beautiful, warm, cloudless day. I went for a bike ride with my brother.  We went to the Douglas Trail which starts in Rochester, MN and ends in Pine Island, MN. 13 miles each way. At about 10 mile in we were being followed by a large brown hawk.  This hawk was acting crazy and would not leave us alone. We finally stopped and the hawk hovered about 30 feet above us. He was catching the wind and was staring at us.  We thought he was going to attack us. I have never seen or heard of a hawk doing this sort of behavior. We did nothing to provoke him. After about 30 seconds he flew off. We kept our eye on him until he was a distance away.  We were just about to start our ride again when I looked up above the hawk in the distance and saw a white orb. The orb was way up high. It was a total cloudless day so it was the only thing in the entire sky. I looked at it for about 10 seconds then it started to grow in size.  It changed it’s shape and became a large triangle craft. It was transparent but the sunlight reflected off it. It looked like glass. With the sunlight you could see it’s depth and it’s dimensions.  Then it shot across the entire sky at an insane speed. It went from the western horizon to the eastern horizon in 1 second flat. A vast distance. It had to be traveling at thousands of miles per hour. It then stopped instantly.  I yelled at my brother to look up. He saw it when it stopped and reached for his phone to take a picture. The object then blinked and shrank until it was gone. There was no time to get a picture.  From the time it grew and went across the sky to the time it stopped and disappeared was only about 5 seconds. There was not enough reaction time to get a picture. After the sighting we continued our bike ride and  witnessed no more actively.  NOTE: The above image is a rendering.