UFOs seen East of Lexington Ohio 06/13/2009 Saturday night 11:20 pm EDT. My wife 41, our 5 year old son and I were headed South coming from Mansfield, OH when my wife noticed 4 lights, not blinking, hovering over Interstate 71 about 1,000 or less feet up in a straight horizontal line. Then they flew over the interstate and went vertical when I finally was able to focus in on them. At that time a 5th showed up came from over trees on east side of 71. I slowed down and noticed the few other cars slowing and a couple stopping on the side of the road. I saw the objects change formation from 4 in a vertical row to a staggered formation when the 5th appeared from what seemed to be out of nowhere it was so fast at first. The 5th one flew over fast to the west from the east over the trees, bigger and closer to us than the other 4, larger than a mac truck.. I stopped the car when the 5th object flew into view. It V-lined straight over towards the others but stayed on the north of them and stopped. The other 4 stayed for a few seconds and went up towards the south, south west, east and 4th disappeared. The 5th larger object went incredibly smooth and slow towards us and when it got over our car (with me out the sunroof opening trying to take pictures with camera) and then went fast towards us, headed north, and then did a perfect curve straight upward into the stars disappearing within about 5 seconds till it looked like a star then was gone. My wife tried to get pictures but the camera she uses daily kept going into timer mode (which is a manual knob you would have to turn and it was not on this setting). I took camera and tried changing settings, turn off and on… and it went to 10 sec timer wait mode for me too. After about 6 tries, I turned off camera and manually put on burst mode, held down the camera trigger and powered it on at the same time, and it took about 20 pictures with most of them blank/black, we managed to get 2 pictures out of the 20 and I made sure to get the I-71 bridge with cars going under it for comparative reference.. The objects appeared to be bigger than the size of the traffic and trucks on the road. When the 5th came from over the trees and West out over 71 then hovered, it was shining bright orange light that sort of morphed colors like yellow, orange, red, blue and black randomly a couple of times but mostly orange. You can see in the photo zoom that one of them is morphing to yellow below. After reviewing the overpasses on the map, it looks like they were just south of Orchard Park Rd. and the closer one came from behind the trees by the fields and pond or lake in the map below to the right of 71 or from the east somewhere. My wife comes from an aviation family and has witnessed everything from NASA rocket launches to home made flying machines. She said she can not believe that anything on earth could ever maneuver that accurate and move that fast silently.

Mount Vernon, Ohio: As I was driving home on 31 July 2018 at 01:43 on Ohio state route 13 north of Mount Vernon, OH a 7-8ft tall, skinny, humanoid like creature ran across the road out of a corn field across into a soybean field (from a east to west direction). I noticed the creature in my headlights from 50-75ft away as I was traveling at a rate of 55-60mph. As it came out of the cornfield I immediately let off the accelerator. At first thinking it was a deer but then seen the creature walked upright. It was 7-8ft in height, tall slender body, arms and legs small in diameter, hands and feet looked over-sized for its body proportion, small neck with oval elongated head, being dark tan to light brown skin tone and had no body hair. The creature slightly turned its head towards my vehicles headlights and I seen the creatures black eyes and small mouth just open slightly as it continued to run across the road. It barely took 2-3 steps and it was across the road at a tremendous rate of speed. I was in total shock and thought I should check it out at first but then thought for a second and being uncertain of what I may have just seen I had better get out of the area. I lost sight of the entity due to darkness. I am a 24 year USAF retired aircrew veteran with a top secret security clearance. Not to be totally bliss but would someone please advise me on what I seen because it still and truly and frightened me. NOTE: This is a 2nd recent sighting in the Mount Vernon, Ohio area……The above image is CGI 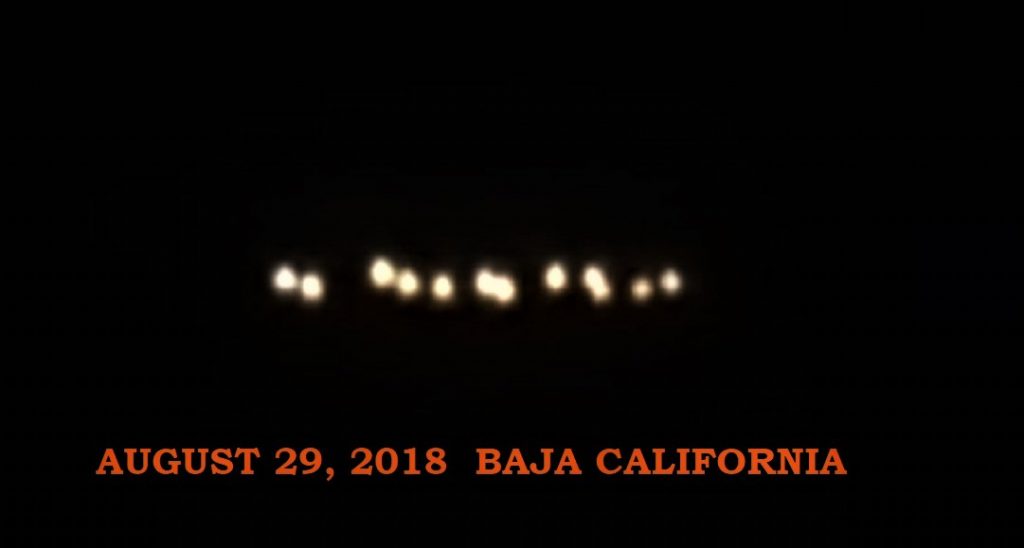 Ryan Hase Lasted maybe 30 minutes. Facing the ocean. Lights were super bright and twinkly. Formed patterns in the sky. Very surreal.  Jeff Ermoian Shot from the balcony of our apartments this evening. My wife Sherri came outside when she heard our friend Marisol excitedly calling her. I grabbed my cel phone and got this long segment.  Shot by Jeff Ermoian. Unusual lights, mostly all stationary above Pemex in Baja California. Pemex was until recently the only gasoline supplier in Baja. This part of the coast usually has one or two ships nearby.   Shot by Jeff Ermoian. Kay Dee I saw this strange thing in the air over Baja MX. That’s all I’m saying. Watch the video for yourself  RollsChoice Adhesive Pen San Diego, California August 29 2018 At first 2 lights appeared then disappeared. Reappeared. Disappeared. Followed by a string of them moving around and disappeared and came back one final time.

I live on a golf course on Lake Erie, approximately one quarter mile from the water. I was out on my patio early evening and looking up the sky and noticed that there were no clouds in the sky, just overcast. I saw this strange looking grayish vapor like cloud that almost looked like a short jet stream. There were no planes in the air at that time and the altitude was somewhat low. It appeared to me that it was out over the lake. I used my phone and took a picture of the cloud and then I took two more within 5 or 6 seconds after that. Then the cloud and all objects were gone. When I looked at the pictures which I have attached this is what I saw. I am the type of person who has to see it to believe it and I can assure you that this was not photoshopped or Faked in any way.  I’m a very skeptical person anyhow this one has me asking questions. Your thoughts.