POLICE CHASE ALIEN CRAFT FOR OVER 85 MILES INTO PENNSYLVANIA

Police officers had experienced one of the fascinating encounters with an alleged structured, low- level UFO in the early morning of April 17, 1966. Portage County, Ohio officers at Sheriff’s Department first noticed the strange object rising from near ground level with bright light.  The sergeant ordered a chase of the object and the personnel did it for 85 miles across the border into Pennsylvania. Police officers from other jurisdictions also joined the aerial pursuit operation.  Mounted Deputy Wilbur ‘Barney’ Neff and Deputy Sheriff Dale Spaur investigated an alleged abandoned automobile on Route 224. Spaur said that he usually look behind him, so no one can come up behind. When he looked in a wooded area behind them, he saw something strange. The mysterious thing came up to approximately tree top level – about a hundred feet. Then it started moving towards them.  Spaur looked at Barney and noticed that he still watching the thing as it came over the trees. Barney was stunned, and the object kept getting brighter and started to light the area. Spaur told Barney to look over his shoulder, and he did.  The bizarre object stopped right over on top of them. They looked down to check their hands and clothes, but they weren’t burning or anything. The only sound in the area was a hum. 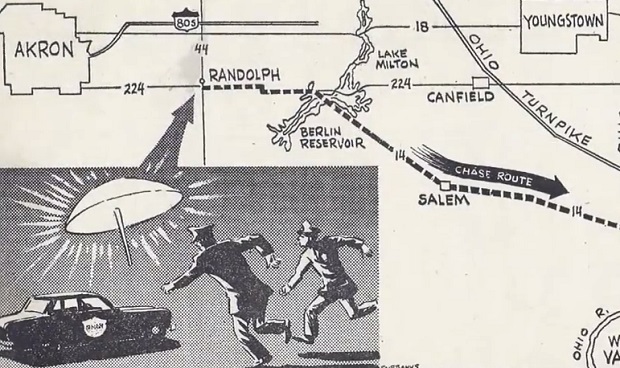 They were petrified, and both went inside their car. They observed the UFO moved toward the east and hovered again. Spaur reported their experience to the dispatcher as the object was around 250 feet away, lighting up the area brilliantly.  Sergeant Schoenfelt told them to follow and observe it while they got a photo unit to the scene. Spaur and Neff went south on Route 183, then returned east on Route 224, which put the unknown thing to their right.  They continued the chase while Spaur is in conversation with other police cars that were trying to catch up with them. Police Officer Wayne Huston at East Palestine, Ohio monitored the radio broadcasts, and he saw the UFO pass by with the sheriff’s cruiser in hot pursuit. He eventually joined the chase.  According to Spaur, when the UFO stopped and hovered, there was traffic on the radio about jets being sent to chase the UFO. However, the UFO seemed to hear every word about fighter planes that it went straight up at a very fast speed and gone. Until today, the case is unsolved and continues to be a mystery.  NOTE: The above image is real but from another location and time.