One of the most bizarre accounts of UFO folklore involves an incident that allegedly occurred in Voronezh, Russia. This case was reported in the United States by the St. Louis Dispatch. The story was originally published on October 11, 1989, in America, but its origin was the Russian newspaper TASS.

The report recounts the adventures of several young children who claimed to have seen a three-eyed alien with a robot escort. The alien was said to be about nine foot tall. The craft, according to eye witness testimony, landed on the outskirts of the city. Shortly thereafter, the tall alien appeared, and upon seeing the young lad, shot a type of weapon at him, causing him to vanish before the eyes of the other people around him.

There are several important elements one must keep in mind regarding this extremely strange case of a close encounter. The original details of the case were brought forward by Genrikh Silanov, head of the Voronezh Geophysical Laboratory, who gave details to the TASS agency.

Silanov stated that the media took an enormous amount of creative freedom with his report. “Don’t believe all you hear from Tass,” he stated.” We never gave them part of what they published.” I take this statement to mean that only a part of the news agency’s report was based on the facts obtained from Silanov. The agency had informed the entire world that Russian scientists had confirmed that an alien spaceship carrying giants with tiny heads had landed in Voronezh, a city of over 800,000 people located about 300 miles southeast of Moscow.

They stated that as many as three of these giant creatures had emerged from the alien ship. These strange creatures were said to have walked in a nearby park, accompanied by a menacing robot. Ironically, TASS was the only media member to print the story in Russia. The newspaper Pravda declined to print, or comment on the strange tale. In defense of the TASS account, Soviet reporter Skaya Kultura said that the agency was following the ”the golden rule of journalism.” “The reader must know everything.”

The TASS account stated that the UFO landed in Voronezh on September 27, 1989, at 6:30 P.M. Young boys playing soccer witnessed the event, stating that a pinkish glow preceded the descent of the unusual flying craft. The pink glow became a deep red as it touched down. Most witnesses described the object as a flattened, disc shape. A crowd quickly gathered, and peered through a hatch that opened. They saw a ”three-eyed alien” about 10 feet tall, clad in silvery overalls and bronze-colored boots and wearing a disk on his chest. “

The TASS account also stated: “A boy screamed with fear, but when the alien gazed at him, with eyes shining, he fell silent, unable to move. Onlookers screamed, and the UFO and the creatures disappeared.” According to the report, about five minutes later, they reappeared. The alien had an object similar to a pistol – a tube about 20 inches long, which it pointed at an unidentified 16-year-old boy, making him disappear.

The alien went inside the sphere, which then took off. At the same time, the boy reappeared. “Children and eyewitnesses of the abnormal phenomenon have been questioned by police workers and journalists,” wrote E. Efremov, the Voronezh correspondent for Soviet Skaya Kultura.” “There are no discrepancies in the description of the sphere itself or the actions of the aliens. Moreover, all the children who became witnesses to this event are still afraid, even now.”

Voronezh residents interviewed later claimed they had observed this UFO not just during the above incident but also many times on September 21, 23, 29 and October 2, between 6 and 9 PM. Some of these incidents involved a different entity: small, with grayish-green face and blue overcoat resembling a loose raincoat.

This phenomenal account is still in need of more eyewitness testimony and research. The Voronezh landing remains an unsolved mystery. NOTE: The above image is CGI. 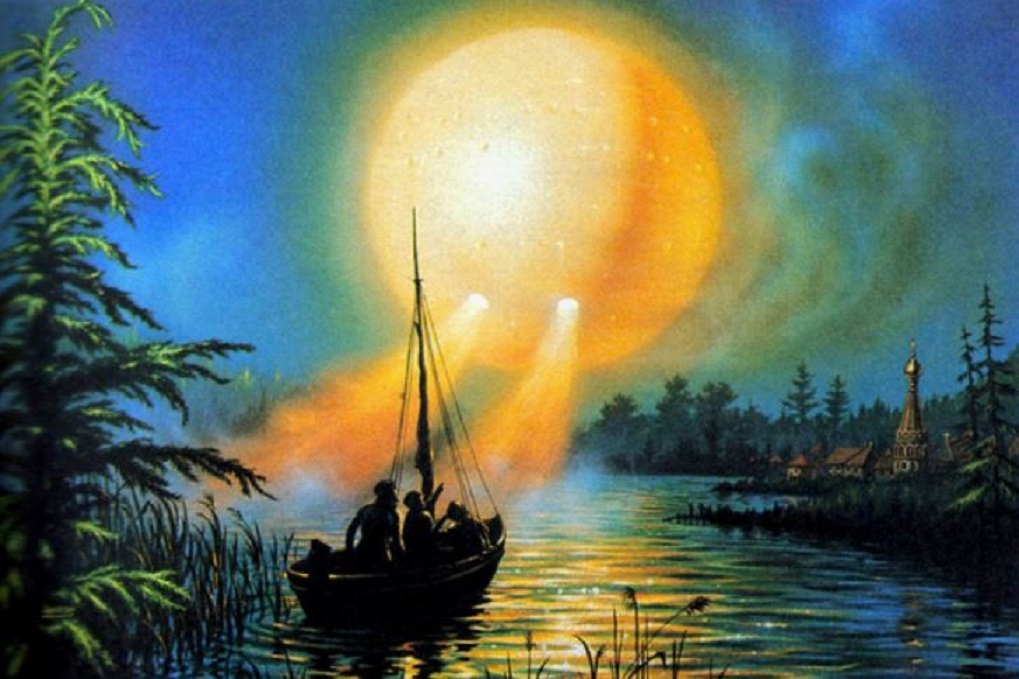