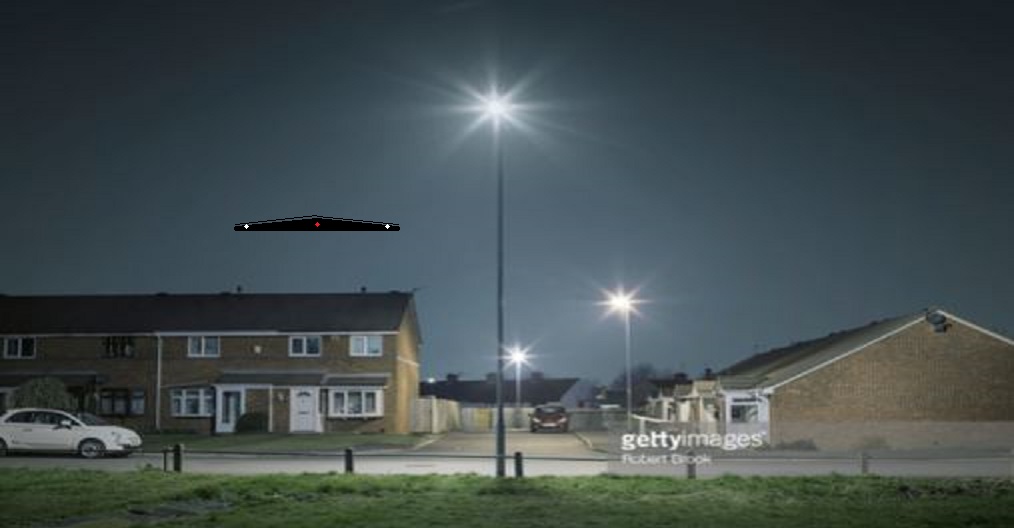 On the night of September 13, 2017, I was walking my dog Nellie. Having seen a few strange objects in the sky near my home, I gaze around the sky whenever Nellie stops to sniff. This night the sky was clear and quiet. We were facing NW between my house and my next-door neighbor’s house. Suddenly, at about 11:15, I caught sight of 5 white lights in an upside-down V shape, with a larger red light in the middle of the V. They were above the trees to the right of my neighbor’s house, moving very slowly from NNE to WSW at a slight downward angle. When they were directly over the neighbor’s house, I could see that they were attached to a dark (grey or black) triangular object, which I could just barely make out against the night sky. I listened for any sound and for a couple of minutes I heard a faint airplane noise. I live near an airport, so that sound could have been unrelated, especially since I couldn’t hear it for half the 5 minutes or so that I watched the triangular object. When the triangle was directly above the my neighbor’s medium-sized house, it seemed to be about 1/5 the size of the house, about 20 ft. above the house, and about 20 ft. beyond it. It hovered there for a few seconds before continuing on. I had the feeling it knew I was there and was pausing either to observe me or to let me observe it. I lost sight of the object when some trees blocked it from my view. By that time, it was very low in the sky and no longer looked like a triangle, just a group of white lights in a horizontal row with the large red light below them. My feelings? Elated! Excited!

This may or may not be related, but just as the triangle lights disappeared from my view, another set of lights appeared out of nowhere, high in the sky directly above where I’d just lost the triangle sighting. These were 3 white lights in a vertical row, with a larger red light to the right of them. They were too far away for me to see, in the dark sky, whether or not they were attached to a craft. These lights were traveling a bit faster than the triangle, but still fairly slowly, in a horizontal direction from SW to NE. I watched them for a couple of minutes, then lost sight of them behind a house and a large tree. I waited about 3 minutes for them to reappear on the other side of the trees, where a large patch of sky was visible, but they never reappeared. Unlike the lights on the triangle, these lights blinked, or at least one of them did. I can’t remember for sure whether it was the white or the red that blinked; I think it was the white lights. I’ve seen lights like this on several occasions over the past couple of months. They don’t make any sound that I can detect, and when I lose sight of them, they never reappear. Usually I see them traveling SW to NE but sometimes I see them traveling NW to SE, as though they were headed for the airport. On these occasions, they are also losing altitude.  NOTE: The above image is CGI.

This case is under investigation by State Director Ken Pfeifer of MUFON Vermont. 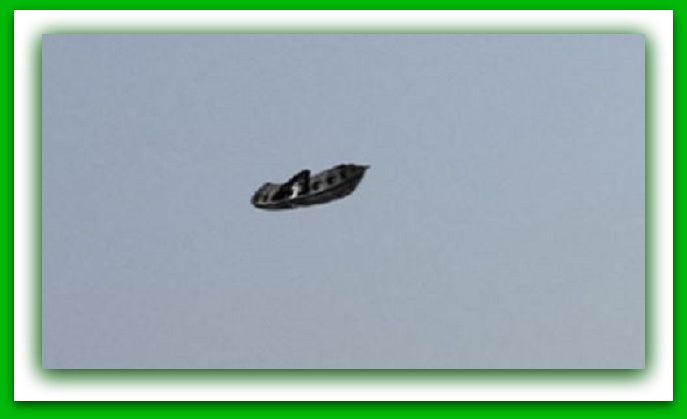