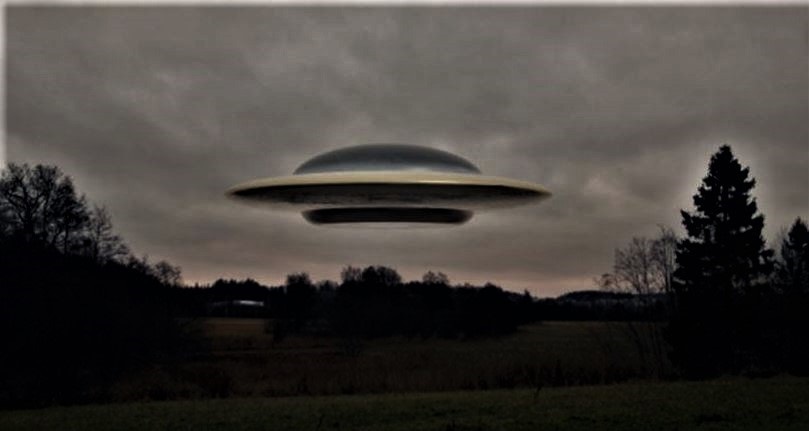 As her husband, Maurice, and their 24-year-old daughter, Teresa, were watching television in the family living room, Ethel stood alone in the back garden of their property in Poole, Dorset, in the south of England. As she unpegged washing from the line she suddenly noticed a “humming” sound. She quickly scanned the night sky – which was clear – but initially didn’t see anything out of the ordinary. Then, as she was about to turn her attention back to the drying clothes, she noticed the “round object” heading in her direction.  The airborne craft was a “greyish” color and there was a prominent dome on top. The object glowed constantly and projected light all around its immediate vicinity, but especially down towards, but not as far, as the ground. Merged within the grey-glow was a much brighter blue-yellow light. Ethel thought, at times, she could see a “pattern” within the light.  She would estimate the size of the craft to be around twenty-feet in width. She would also assert that it must have been relatively low to the ground as she could see “occupants on board”, in the dome.

Humanoids “Looking Out” From The Windows

Ethel would elaborate that the dome had two very clear windows which would take up around two-thirds of the structure. On the other side of these windows were “two humanoid creatures”, one in each frame. Each figure was of the size and proportions of a human. Both adorned a one-piece silver suit that covered every part of the body aside from the face (although Ethel believed the headwear was separate from the suit itself). Each of the figure’s facial features were “slender” but each appeared to be male.  As she focused on the craft and the humanoids inside, the object came to a stop and hovered over the garden. All the while, the rest of the Field family remained inside watching TV. Ethel would put up her arms, using her hands to shield her eyes from the intense light now shining directly at her. She began to feel a heat coming from above as well as a “trembling” in the ground below.  One of the figures had his attention downwards and appeared to be manipulating unseen controls. The other, however, was looking directly at Ethel. He used his hand to make a gesture that she took to mean they intended on landing.  Now beginning to become frightened, she turned and headed towards the back door of her house. She would turn her attention back to the craft before entering her home, however. She did so just in time to see the now disappearing object speeding away. Ethel quickly looked at her watch. The whole encounter apparently lasted no more than thirty seconds.  NOTE: The above image is CGI.