While traveling on an unlit road toward the Belt Highway at 1:00, two dark forms slowly crossed the road just above the tree line.  The rate of speed was slow enough that the objects, moving perpendicular in relation to the vehicle, took more than 5 seconds to traverse the 2-lane road before disappearing behind the trees.  They were rectangular or cigar-shaped, and were completely silent as they moved.  From a distance, the objects looked as if a slight haze surrounded them, but as we drove almost directly underneath, it became clear that they were solid and much darker than the clear night sky around them.  Our car headlights may have caused the haze effect as the haziness disappeared once we were on the other side. Both objects moved at the same rate of speed and in such a tight formation that the two forms might have actually been two volumes joined together in some way.  We lost sight once they crossed over the treeline. We were surprised and confused but kept traveling until we were clear of the trees, and again saw the object on the other side before driving onto the brightly-lit highway and losing sight of the object(s) for the last time. 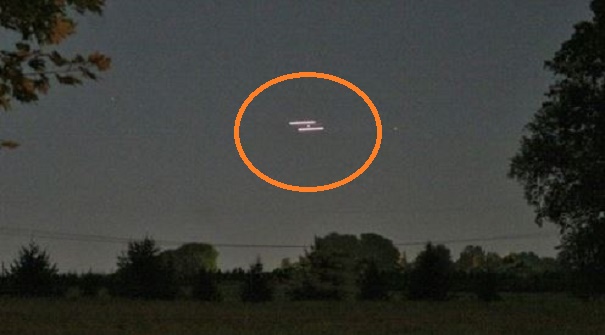 NOTE: The above image is real and taken in Alloway Twp in New Jersey and investigated by Ken Pfeifer of MUFON New Jersey.