The Pentagon has finally uttered the words it always avoided when discussing the possible existence of UFOs — “unidentified aerial phenomena” — and admits that it still investigates reports of them.

In a statement provided exclusively to The Post, a Department of Defense spokesman said a secret government initiative called the Advanced Aerospace Threat Identification Program “did pursue research and investigation into unidentified aerial phenomena.”

And while the DOD says it shut down the AATIP in 2012, spokesman Christopher Sherwood acknowledged that the department still investigates claimed sightings of alien spacecraft.

“The Department of Defense is always concerned about maintaining positive identification of all aircraft in our operating environment, as well as identifying any foreign capability that may be a threat to the homeland,” Sherwood said.

“The department will continue to investigate, through normal procedures, reports of unidentified aircraft encountered by US military aviators in order to ensure defense of the homeland and protection against strategic surprise by our nation’s adversaries.”

Nick Pope, who secretly investigated UFOs for the British government during the 1990s, called the DOD’s comments a “bombshell revelation.”

Pope, a former UK defense official-turned-author, said, “Previous official statements were ambiguous and left the door open to the possibility that AATIP was simply concerned with next-generation aviation threats from aircraft, missiles and drones — as skeptics claimed.

“This new admission makes it clear that they really did study what the public would call ‘UFOs,’ ” he said.

“It also shows the British influence, because UAP was the term we used in the Ministry of Defence to get away from the pop culture baggage that came with the term ‘UFO.’ ”

John Greenewald Jr. — whose website The Black Vault archives declassified government documents on UFO reports, “Bigfoot” sightings and other subjects — also called the Pentagon’s use of the term “unidentified aerial phenomena” unprecedented in its frankness.

“I’m shocked they said it that way, and the reason is, is they’ve seemingly worked very hard not to say that,” he said.

“So I think that’s a pretty powerful statement because now we have actual evidence — official evidence — that said, ‘Yes, AATIP did deal with UAP cases, phenomena, videos, photos, whatever.’”

Greenewald said he hopes that the Pentagon will release more information about the AATIP, either by voluntary disclosure or through requests under the federal Freedom of Information Act.

“But at least we’re one step closer to the truth,” he said.

The existence of the AATIP was revealed in 2017, along with a 33-second DOD video that shows an airborne object being chased by two Navy jets off the coast of San Diego in 2004.

At the time, former Senate Majority Leader Harry Reid (D-Nev.) took credit for arranging $22 million in annual funding for the AATIP, telling the New York Times that it was “one of the good things I did in my congressional service.”

Reid’s home state of Nevada hosts the top-secret military installation known as “Area 51,” long rumored to be the storehouse for an alien craft that crashed in Roswell, New Mexico, in 1947. Reid, through a spokeswoman, declined to comment. NOTE: The above image is CGI. 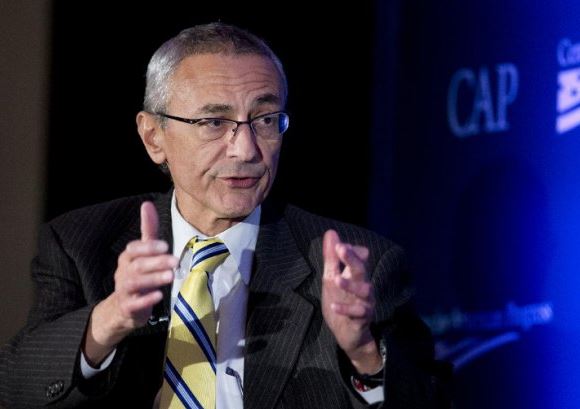 Outgoing senior Obama adviser John Podesta reflected on his latest White House stint Friday, listing his favorite moments and biggest regrets from the past year. Chief among them: depriving the American people of the truth about UFOs.  Podesta’s longtime fascination with UFOs is well-documented, as his brief political hiatus following four years as President Bill Clinton’s chief of staff freed him up to pursue his otherworldly passion.  At a 2002 press conference organized by the Coalition for Freedom of Information, Podesta spoke on the importance of disclosing government UFO investigations to the public.  “It’s time to find out what the truth really is that’s out there,”  he said. “We ought to do it, really, because it’s right. We ought to do it, quite frankly, because the American people can handle the truth. And we ought to do it because it’s the law.”

Following Podesta’s tweet, Friday, the Washington Post recalled an exchange one of its reporters had with Podesta in 2007. Karen Tumulty had asked Podesta about reports that the Clinton Library in Little Rock, Arkansas, had been bombarded with Freedom of Information Act Requests specifically seeking email correspondence to and from the former chief of staff including terms like “X-Files” and “Area 51.” Podesta’s response, through a spokesperson, was “The truth is out there,” the tagline for the TV show “The X-Files” of which Podesta was known to be a fan.  A 2010 editorial in Missouri’s Columbia Tribune disparaged reports that Podesta had asked an outspoken UFO photographer to stop discussing his knowledge of extraterrestrial activities in public.  “One wonders why Podesta would do such a radical reversal, given his former plea for UFO disclosure,” the editorial implored.  But contrary to the Columbia Tribune’s concerns, Podesta had clearly not abandoned the cause. He wrote an introduction to the 2010 book “UFOs: Generals, Pilots, and Government Officials Go on the Record.”  Unfortunately, Podesta will likely have little time to fill out FOIA requests in his new job at Hillary Clinton’s presidential campaign. Perhaps, as his tweet suggests, he’s passing the torch to New York Times columnist Maureen Dowd.