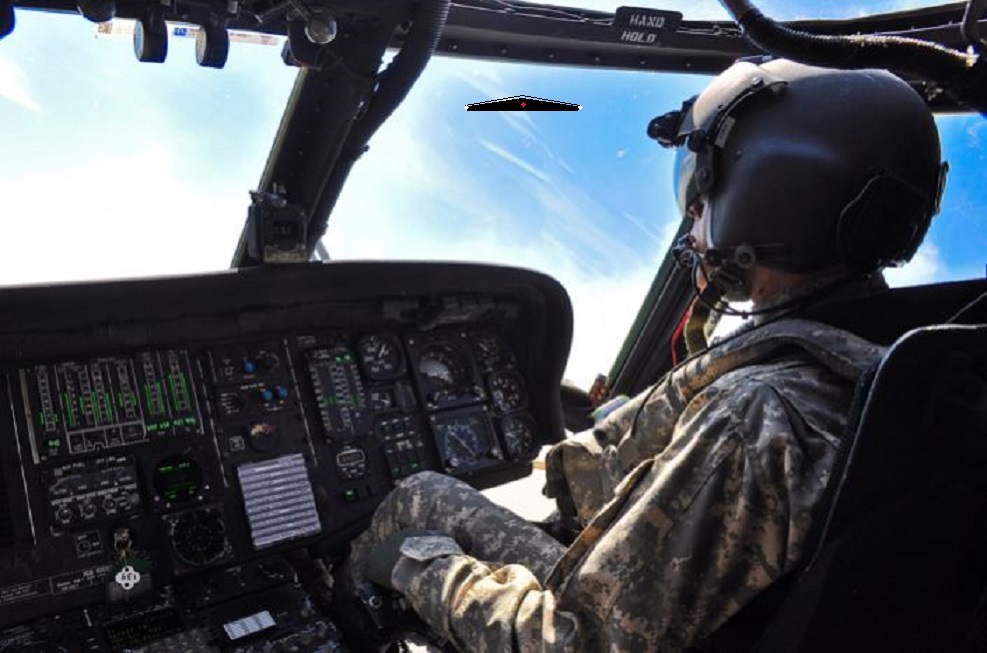 As Pilot in Command of a MedEvac UH-60A for a Medevac Helicopter Company I had transfered controls to my copilot to take a break from flying as we were on what is called a “Milk Run” from Al Asad Airbase to Balad Airbase and back to Al Asad. These milk runs are done either really late at night or very early in the morning. Flight took place May 15th 2005 aprox 2:30 am as written in my logbook. We had completed most of our flight and were in between Ar Ramadi and Lake Tharthar heading west towards Al Asad. Flight was under ANVIS 6s. Shortly after the transfere of the flight controls I looked up through what we call the “Green House” a plexi-glass window above the pilot and copilot stations in the helicopter and located a triangular object with five lights along the point and forward portion of the object. Object was observed moving at high rate of speed coming from the south heading towards the north at what I would estimate FL300. Object stayed in sight under night vision goggles for approx 1 min then went out of sight as we continued flying west. We were at an altitude of 300ft as night restrictions in Iraq apply. Once we landed I took a look at the daily flight scheduel for all multi-national forces in Iraq to make sure what I observed was not an aircraft, no aircraft were operating in the area at the time of the sighting. I did not mention the incedent to any other pilots from fear of ridicule. I had always thought that as a pilot if I saw a UFO I would tell everyone but when it happened I could not bring myself to speak of it. Now I want to know whats going on in the skies over Iraq as other soldiers have seen strange phenomena under NVGs.  NOTE: The above image is CGI.

This case is under investigation by International Director Ken Pfeifer of MUFON Iraq. 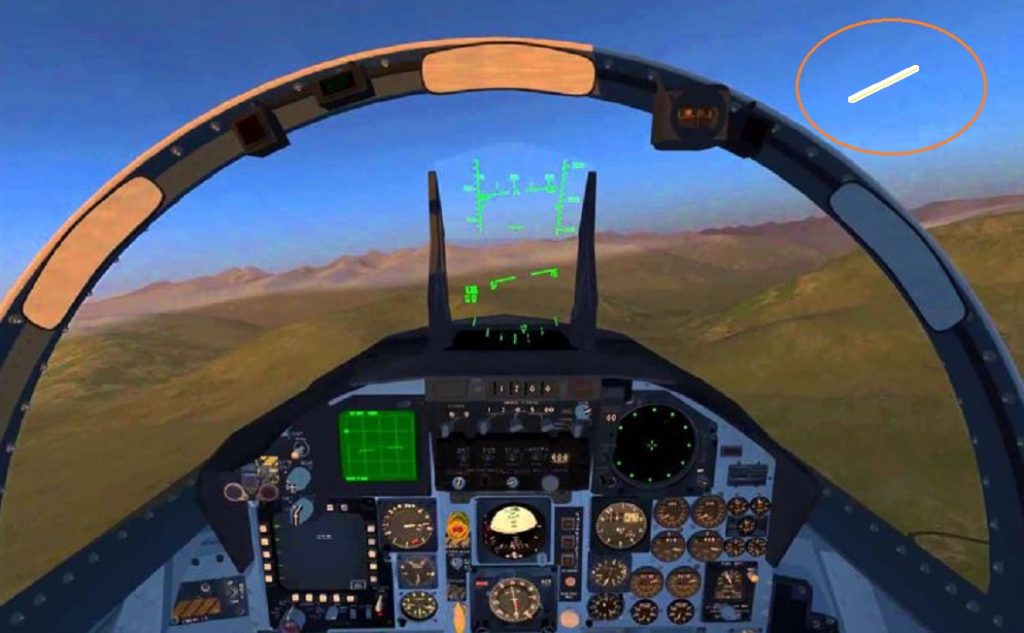 At approximately 2:20 pm Arizona time on 2/21/2018 I witnessed the following event. Two fighter jets that appeared to be F-15’s flying at about 10k-15k feet approached Lake Havasu City from due west. I am not a military jet expert and can not definitively identify their models. Both jets left double-wide contrails. Although they both left contrails, there were maybe a dozen instances where they stopped leaving contrails for a few seconds, or left contrails in “morse code”-like patterns before steady contrails resumed. Both jets had swept wings. They made some very unusual sharp turns which caused me to notice and observe them. They zig-zagged in unison over a wide swath over the area for about 10 minutes, then flew back in the direction from which they came. There was something up there with them. It was a long white object. Compared to the jets, it was maybe 3 to 4 times as long and from my vantage point seemed to be about as wide as the fuselage. It did not leave a contrail. The jets appeared to chasing it. I only saw the white object briefly. I didn’t notice it until well into the event at which point it was about 60 degrees above the horizon north east of my vantage point. I watched it for about 15-20 seconds then knocked on our front door to get the wife to come out and see it. When I looked back in the sky I had lost track of it. The jets continued to zig-zag across the sky for maybe 5 more minutes before flying in a straight line back in the direction from which they came. While the jets were making their departure I talked to one of my neighbors who also observed the event, but she did not see the white object. NOTE: The above image is CGI.

We live in Northern Virginia. Yesterday, at 815PM my wife and two sons (ages 12 and 10) observed a large object (size of a house) traveling just above the treetops along Chain Bridge Road. They were traveling from McLean to Washington DC and saw it on Chain Bridge road but also saw it again after they crossed the Chain bridge and were on the DC side on Clara Barton parkway. My son first saw it and said “What is that?” My wife was driving and didn’t look but immediately thought it was a plane because the Potamac river nearby is a regular flight path of airplanes landing at Reagan National airport. She said, its probably just a plane. But my son had a clear view and it wasn’t a plane. Then my wife saw it and so did my other son. The first time they saw it, it had 4 blue lights. They crossed the bridge and then saw it again from Clara Barton parkway. They say this craft was as large as a townhouse. It was not a conventual aircraft (plane, helicopter, balloon). They saw it twice from very different vantage points. I tried to find a webcam with an archive feature to look at its archives but couldn’t find one. I recommend researchers explore that since we’re still inside 24hrs of the incident. I also recommend researchers file FOIA requests for any radar data from National and Dulles airports. I know this happened at 8:15 because my wife called me as soon a it happened and I have the phone timestamp. On top of all of this, intriguingly, there were several sever power outages in McLean yesterday. Probably not related but worth noting since most power outages occur during weather events like high winds, ice or rain….but it was sunny, warm and clear yesterday. I am posting this in hopes that anyone else who saw it will corroborate the sighting. If a researcher wants to interview my family, give me a call.  NOTE: The above image is CGI