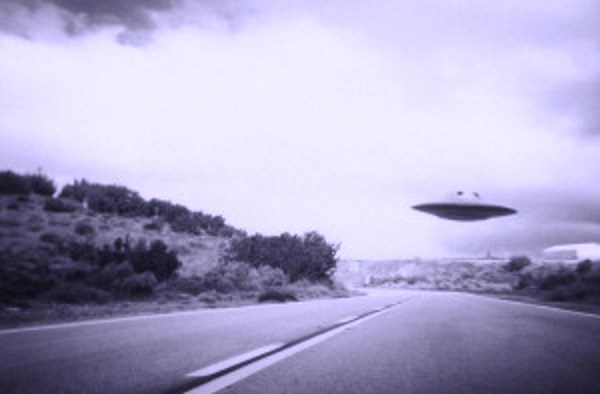 In November and December 1980, the eastern side of Britain was experiencing a major UFO sighting wave. There were chases of UFOs by police cars near the coast, a UFO that overflew an oil rig in the North Sea, and the wave culminated in the famous events on the East Anglian coast at Rendlesham Forest. Just a month before these landings beside those NATO air bases, one of the most impressive alien abduction cases took place in the small Penninemill town of Todmorden, West Yorkshire, right in the centre of Britain’s most active window area known locally as “UFO Alley”. Police Constable Alan Godfrey was on patrol on the night of 28 November 1980. Just before dawn he drove along Burnley Road on the edge of Todmorden looking for some cows that had been reported missing. They were only found after sun-up, mysteriously relocated in a rain-soaked field without hoofmarks to indicate their passage. Giving up his nocturnal hunt, Godfrey was about to go back to base to sign off duty when he saw a large mass a few hundred yards ahead. At first, he thought it was a bus coming towards him that took workers to their jobs in town and that he knew passed about 5:00 a.m. But as he approached, he realized that it was something very strange. It was a fuzzy oval that rotated at such speed and hovered so low over the otherwise deserted highway that it was causing the bushes by the side to shake. The police officer stopped, propped onto his windscreen a pad that was in the patrol car to make sketches of any road accidents, and drew the UFO. Then there was a burst of light, and the next thing he knew he was driving his car again, further along Burnley Road, with no sign of the UFO. Godfrey turned around and examined the spot where the UFO had hovered. The road was very wet as it had rained heavily earlier in the night. But just at this one location was a circular patch where the roadway had been dried in a swirled pattern. Only when back at the police station did he realise that it was a little later than he had expected – although any missing time was probably no greater than 15 minutes from estimates later taken on site. Concerned as to possible ridicule, Godfrey at first chose not to make an official report, but changed his mind later that day when he discovered he was not alone. After breakfast that morning, a driver who had been on Burnley Road three miles further out at Cliviger reported seeing a brilliant white object and contacted Todmorden police. The time matched that of Alan Godfrey’s. Furthermore, a police patrol from an adjacent force (Halifax) had been engaged in a stakeout for stolen motorcycles on the moors of the Calder Valley and had witnessed a brilliant blue-white glow descending into the valley towards Todmorden shortly before Godfrey experienced his close encounter. Their story, when it reached Todmorden police station, formed a second match. Encouraged by this news Godfrey filed an official report, but was surprised when police chose to release the story to the local newspaper the following week. From here, UFOlogists discovered the case and a lengthy investigation was mounted by a Manchester-based UFO group.  NOTE: The above image is a rendering.

Thanks to www.ufocasebook.com and Jenny Randles Ufologist.