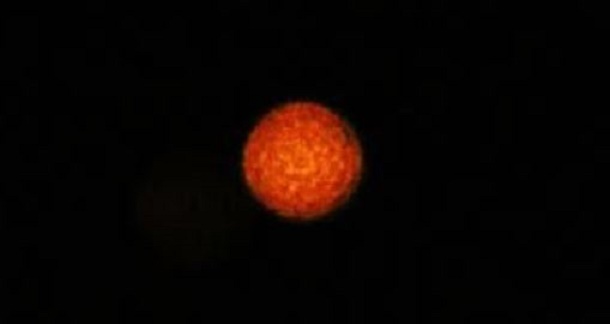 Shape of objects: Large circular disk object with 2 red/orange lights at the base surrounded by a glowing white ring

Description: At around 7.30pm on Friday night in Robina, QLD, a flying object hovered very slowly in one spot below the clouds, much lower than any plane or helicopter I have witnessed in the area. The two red lights at the base of the object faded to orange before flashing rapidly, object also appeared to be expanding then retracting its size repetitively before closing in completely and flying away extremely fast. The white ring or orb around the disc appeared to act as a bubble or light.  The sighting lasted about 7 minutes and had 3 witnesses. We have previously had two sightings identical to this within the past two months from the same location.

Weather Conditions: Clear with some clouds

Description: Bright amber orange orb, occasionally with flecks of red. Moving from east to west at cloud level (occasionally it would be in front of clouds, then more behind as it moved west) It was able to accelerate quickly, to a speed many times faster than a plane would appear from the ground, then it would slow down quickly, then accelerate again. It eventually disappeared behind clouds to the west.  NOTE: The above image is a rendering.