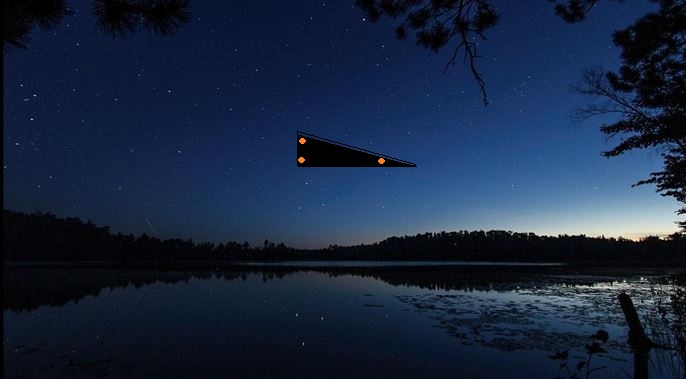 CLOSE ENCOUNTER WITH AN ALIEN TRIANGLE OVER ONTARIO
.
DECEMBER 19, 2015   ………  WALPOLE ISLAND  ONTARIO CANADA
.
It was an unusual night with fog on the river, warm weather when it should be cold and/or snowing. The fog stayed close to the ground reaching a few stories in the air at most. I went to town to buy something and made my purchase right after they called “Shoppers, you have 10 minutes…” so I know it was about that approximate time when I arrived home. I drove the rural way home along the river. I live very close to the river. When I was getting very close to home, I noticed a cluster of 3 orange lights very close to me over Neighbor A’s yard across the road from me or right on the river; that’s how close we are to the river. I live in a rural area so the neighbors’ houses are a few hundred feet from each other. This cluster of orange lights was about helicopter height. There was no structure to support the lights or I could not see the structure even though it was above the fog. The lights beamed a little. They looked exactly like the street lights on my road with the same color, same size, and same slight beam of light except that I was looking at a cluster of 3 lights. The orange lights stayed stationery as I drove down my road and into my drive way. I had never seen orange lights this low in the sky and there was no structure present as to why the lights would be there. I parked the car in the back of the house and ran to a front corner of the house to see if the cluster of lights were still there. It was but it started slowly moving in a straight line, moving closer to me. I ran the short distance to get my sister to come outside and look at “this big plane”. There is frequent unusual activity in the sky here so she put on shoes and came running out. What I witnessed before she got outside was a giant black triangle shape reveal itself over Neighbor B’s house which is the 2nd house from me to the west. The triangle went in a straight line over Neighbor B’s house, it backed up a little bit like it changed it’s mind and then traveled in straight line directly at me. It had descended to top-of-tree height by now. Was it going to crash? Why is it so low? What is it?

I was scared and wanted to run somewhere but where to? I was in the middle of the yard and if I ran in the house and it crashed, that was not a great place to go. If it was looking for me, it had already spotted me. My sister arrived outside and looked up to see it just as it started to travel in a straight line from Neighbor B’s house. It had great height to it. It was not a flat triangle. It was several stories height. It was flat black or dark gray color. It was way larger than a football field. It was enormous. It was so close, detail was clear of it’s structure, size and lights. It turned on it’s bottom lights on it’s way over to my yard. It had varied bottom lights. Outlining the craft were small white lights with 3 sets of red/green lights. In the middle was a large triangle area of what looked like white LED lights glowing. The pattern of these white lights was indescribable. Was it showing clouds or transparency? As the triangle front endpoint arrived at the yard, it started emitting this hydraulic engine type of noise, loud, roaring, and bumpy sounding. I’m familiar with hydraulic engine sounds as to the many boats on the river here and that’s the closest I would describe it. (I had heard that same loud engine noise travel the entire sky a few weeks prior to this event from inside my house. I ran outside to sight what would make that loud noise and I could not see it.) It scared me so I didn’t look when it was directly overhead but my sister watched it. I could still see it even when not looking directly at it. The white lights glowed. I looked up at it after several seconds, and it was still there, hovering/moving very slowly. I got a good look at the bottom lights at this time but still don’t know how to describe the white lights in the middle, what pattern the white lights were. Maybe it was a transparent area as well as being lit up. If she hadn’t come outside when she did, I was on my way to hiding. Instead, she came outside and yelled at it to get out of here. The noise was loud enough that I couldn’t hear her yelling at it. I felt responsible for calling her outside to see it and I didn’t want it to get her so I stayed while making useless getaway plans and getaway movements. She seen it approach but she didn’t realize how close it was because of night depth perception issues. I wouldn’t have yelled at it but she did and I’m glad. I hope that’s what made it go away. We watched it until the end of the triangle shape went over us. It turned off it’s sound and lights after it went over us. The black triangle disappeared into the black night and we didn’t stand around outside after that. When the sky is heavy with water like that, you can’t see the stars, it’s just very dark. We still marvel over seeing this triangle. We talk about it every day. I’m nervous when I have to frequently walk back and forth between the 2 houses on the lot here. You don’t want to see it again but you want to. Such a mixture of feelings, it was a major event for me.  NOTE: The above image is a rendering.
.
KEN PFEIFER WORLD UFO PHOTOS AND NEWS
WWW.WORLDUFOPHOTOSANDNEWS.ORG
WWW.WORLDUFOPHOTOS.ORG
THANKS TO WWW.MUFON.COM
.
.