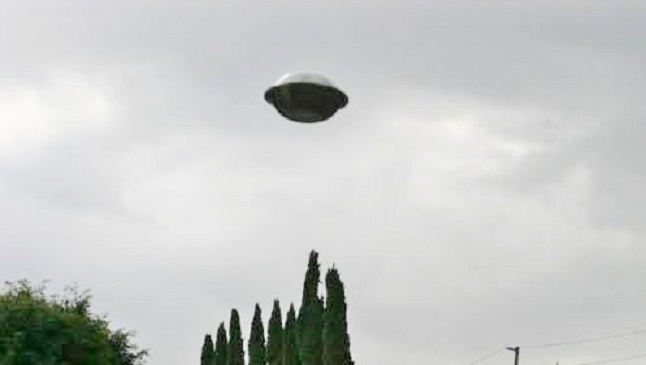 I was awoken from sleep by a presence in the room last night. When I opened my eyes there was a red fog engulfing the entire room. I tried to wake my wife up but she wouldn’t budge. Not even my dog who was sleeping on the bed would wake up. Just like a vacuum, I watched the fog get sucked out of my bedroom door (which was open). I was extremely scared but chose to run to my front door. There was a slight buzzing noise coming from outside (sorry I’m getting goose bumps real bad just thinking about this). I opened the door and looked up. Not 50 feet above the ground was a blueish chrome disk sitting almost motionless in the air. This was at night and it’s weird how I was able to see the distinct blueish chrome color of the disk. There was a slight wobble to it also. I felt like something was staring at me. The disk was about 30 feet around and had a small “base” on top of it. There were no lights or markings on it. It sat there for about! a minute or two (I think but it’s almost like I had been staring at it for 15 minutes) and the buzzing noise stopped. There was a pop that came from it (there go the goose bumps again) like a balloon popping and it slowly lifted straight into the air. When it got about I’d say 100 or so feet up it faded out of sight into nothingness. I ran back into my house to check on my 2 year old son and he was fine.   ((NUFORC Note: We spoke via telephone with the source of the report, and he sounded to us to be sincere, and sober-minded. We suspect that he is an excellent, and reliable, source of information. PD)   I was able to wake my wife up and asked if she had seen anything. She got teary eyed and without saying anything went immediately back to sleep. My dog almost looked sad and went back to sleep as well.  This by far is the weirdest and unnerving thing I have ever witnessed in my life. I’m am scared s**tless since last night. While I have seen “UFO’s” in the sky before and reported them on this site, this again by far has confirmed my belief that something else is out there. I know I wasn’t dreaming, I don’t do drugs, I wasn’t on any medication, nothing. What the hell happened last night?  NOTE: The above image is CGI.