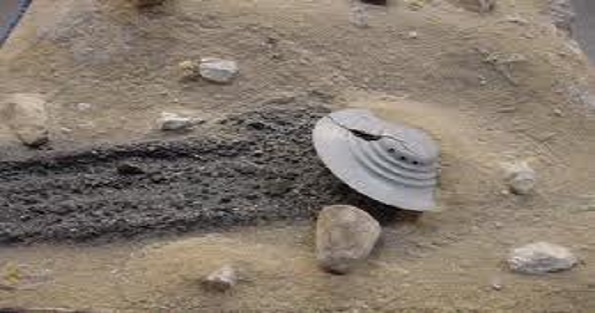 Marine Corps Lance Corporal John Weygandt, who was part of the Disclosure Project, was sent to Peru in March 1997, to provide perimeter security for a radar installation that he was told tracked drug traffic aircraft in Peru and Bolivia. He states, “About midnight, while I was on guard duty, Sergeant Allen and Sergeant Atkinson told me, an aircraft crashed and they need us to go and secure the crash site.” Early that morning we drove six Hummers close to the crash site just when it started to get light. Well, we found the area real easy because there was a huge gash in the land where something had crashed. Everything was burned and it was as if something had almost cut warm butter with a knife. It was like something on fire or had some kind of energy like a laser had cut it. It was really strange. I was in the front with Sergeant Allen and Sergeant Atkinson and we were ten or twenty meters ahead of everyone else. We were the first ones to see this thing. It had gone up the hill and then off in the side of the ravine and ridge. This was a 200-foot ridge, of solid rock. A huge craft was buried at a 45-degree angle in the side of the cliff there at the ridge. It was straight up and down. ‘

The craft was dripping a greenish-purple syrup-like liquid. The liquid was everywhere and fluctuated like it was alive and changing to a different shade of greenish purple. The craft was humming like a bass guitar and had a slowly turning light. Most of the craft seemed buried into the cliff but vents, like a fish gill were on the back.  The liquid got on my clothes and ate holes in them and burned off some the hair on my arms. There were three holes in the ship that may have been hatches that were not flush with the main body of the craft. There was another hatch the same width and diameter of the top hatch and it was kind of crooked to the side and it was half-open. I didn’t see any lights or anything coming out of it but I felt this… presence. It is real strange. I think the creatures calmed me. It was weird and I think they were trying to communicate with me, like, I guess, telepathically. The Corporal estimated the craft was ten meters in width and about 20 meters in length and shaped like something between an egg and a teardrop. The skin of the craft had bumps and notches and appendages on it. It was really organic and almost like art. It looked like something that could be made in a shop. It looked like it could have been handmade but out of what materials I do not know. It was definitely nothing like titanium. It looked like metal but there was no reflection. The sun was shining on it and I could see the different shades of the craft and it didn’t reflect anything. Suddenly the Sergeants were yelling at me to get the hell out of there.

After we climbed back up, the Department of Energy people were there. They knew about it so I don’t know why we went there still to this day. But anyway, I was arrested and cuffed, both hands down. I had all my gear taken from me by men in black cammies who threatened me, subdued me, and put me on a cot. They had no nametags. At the crash site there were about thirty of these guys wearing hazard suits.  I had been told aircraft were flying in and out of the atmosphere at mach ten plus. When you have objects that reenter the atmosphere, then stop on a dime, then turn around, and go exactly the opposite direction – that is somewhat strange. Meteors don’t do that. The craft was not from Earth. I knew that when I looked at it. I wondered if those facilities were built for the intent to track UFO’s and their cover was to track drug aircraft. They had laser range finders and all kinds of high tech stuff that I have never seen before. They [the laser range finders] looked like big telescopes and some sort of Command Center manned by a multi –national force. So these craft were tracked from this particular radar and were logged. I’m confident that when I saw the aircraft, it had been hit by something. Something had taken it out.  Editor’s Note: Corporal Weygandt described a craft damaged by enemy action, either ours or an opposing alien force. His testimony on Page 274 of “Disclosure: Witnesses Reveal the Greatest Secrets” by Steven Greer M.D. is excellent and indicates lethal deadly force was being used against alien intruders during the Clinton Administration. We can assume this war continues.  NOTE: The above image is CGI.

SPECIAL THANKS TO FILER FILES AT   http://nationalufocenter.com