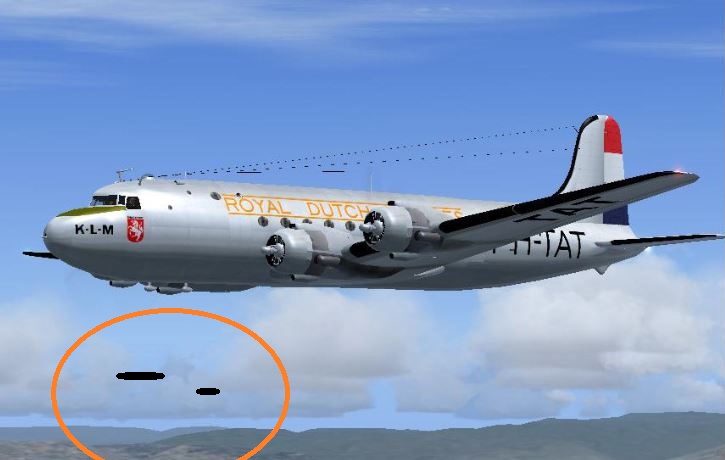 BUSY DAY IN FEBURARY 1967 FOR ALIEN CRAFT SIGHTINGS
.
FEBURARY 3, 1967   …………  LIMA PERU
.
6:30 PM. The pilot was flying a passenger jet from Chiclayo to Lima. The DC-4 was at 7,000 feet when they saw, west of the plane, a very luminous object which they thought was a star or planet. But after they were very sure that the apparent movement of the object was not the effect of their aircraft’s motion, they could see that the object was approaching them very fast and was closer to their aircraft. They estimated the distance of the object was about 8 nautical miles. Pilot: “At this time it was really a spectacle, it had so much light that all passengers of our plane saw it and started to be very nervous and exclaimed, “There is an OVNI”. After a while the UFO passed over the plane and stopped right over them. At this moment they noticed a 15° left oscillation on their radio compass, and later a 20° right oscillation without stopping, and all the lights in the main cabin started to reduce in intensity. Then, as their fluorescent lights of the cockpit and all radio receptions went out there was a bit of static noise.
.
Feb. 3, 1967; Piggott, ARKANSAS
Time not reported. Numerous witnesses saw maneuvering objects with domes and flashing lights. Separate (satellite) and merging objects also were reported. Dogs reacted (animal reactions). (Keyhoe and Lore, 1969b, p. 71.)
.
Feb. 3, 1967; Lindsborg, KANSAS
7:40 p.m. CST (8:40 p.m. EST). Five people watched a disc or ellipse that first flew like an airplane, but then moved with irregular, jerky, up and down motions, and sometimes with hesitating forward motion. The object hovered over the highway for 15-20 seconds, then sped from sight in 15 seconds. Witnesses could see military bombing practice in the distance at the same time. (NICAP report form.)
.
Feb. 3, 1967; Hamilton, Ontario, CANADA
8:30 p.m. EST. A man saw an object estimated to be 30 feet in diameter and 15 feet thick with a row of white lights and a tangerine-colored light on the bottom (body lights). The object zipped back and forth at terrific speed. Observations were made from various points coordinated by two-way radios. (Hamilton Spectator, 2/4/67, copy in NICAP files.)
.
NOTE: The above image is CGI.
.
KEN PFEIFER WORLD UFO PHOTOS AND NEWS
WWW.WORLDUFOPHOTOSANDNEWS.ORG
WWW.WORLDUFOPHOTOS.ORG
THANKS TO  http://www.nicap.org
.
.