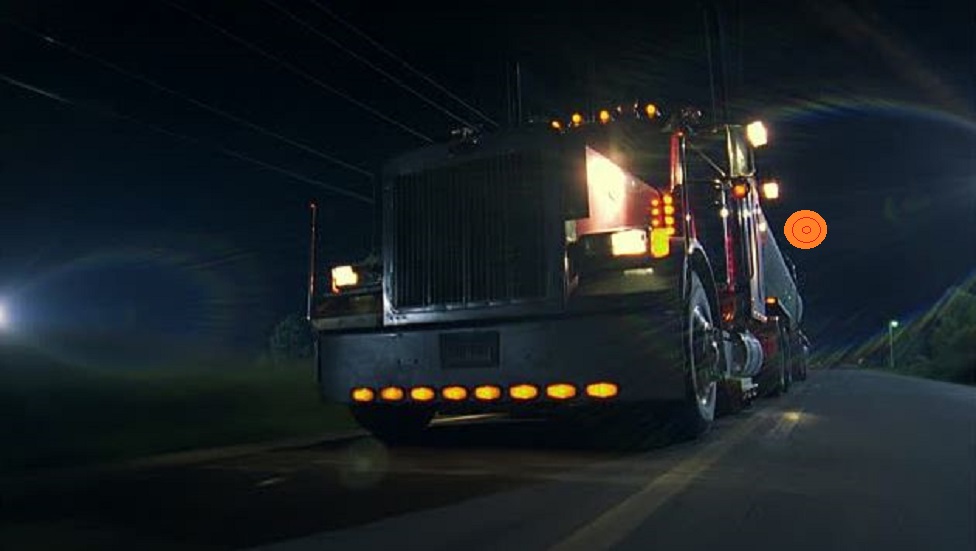 TRUCK DRIVERS CLOSE ENCOUNTER IN HAYS KANSAS
.
1999 ……..  HAYS KANSAS
.
“Back in 1999, I was hauling a load of asphalt at 2 o’clock in the morning to Broken Bow, Nebraska. I was traveling up Highway 183. It was quite stormy and rainy. And there was an orb that come up just past Hays, Kansas on Highway 183 in Ellis County. This orb itself was, I’d say orange, like the orange of the moon when it first comes up. And it came right at the side of my truck even though in the heavy rain and the thundering and lightning and stuff and it scared me so bad. Anyway, I was compelled to roll down my window and see if I could touch it and I did. I’m travelling about 50 miles an hour. My arm’s wet. The rain’s hitting my arm and it’s stinging, you know, but there was like a light shock through my arm when I touched it. When I pulled my hand back in the cab of the truck, it was like a cobweb on the back of my fingers.  Anyway, like two days later, I got sick. I have this cold and I can’t get rid of it and I don’t even know where to go with this because it seems like every year in August, I get sick. The thing is, the reason why I’m concerned now is it’s not about me, it’s about my wife and kid because, this year, they got sick with me. In fact, I got a 13 year old aged daughter that now… and we all got sick last week and it’s the same cold. It comes every August, basically the same time every year I get sick in August. (The guest, Ted Phillips, asked how the orb left the side of the truck) Well, I touched it and it just stayed on the side of my truck. And I mean it just kind of drifted back, you know, into the rain where it just kind of faded out. The interesting thing is, I dropped off my load of asphalt at Broken Bow, Nebraska. I came back the next day. I’m guessing it was about 10:30 or 11 o’clock towards Hays, Kansas and there was a lot of government vehicles, military vehicles and Suburbans with government plates on them, all different kinds of makes and sizes and stuff. I just found it odd. We’re close to Riley but still I found it odd that, you know, I seen this, touched it and I came back and then, that following morning, or actually afternoon, there are government vehicles out where I seen it.”  NOTE: The above image is CGI.
.
KEN PFEIFER WORLD UFO PHOTOS AND NEWS
WWW.WORLDUFOPHOTOSADNNEWS.ORG
WWW.WORLDUFOPHOTOS.ORG
THANKS TO WWW.PHANTOMSANDMONSTERS.COM
.
.