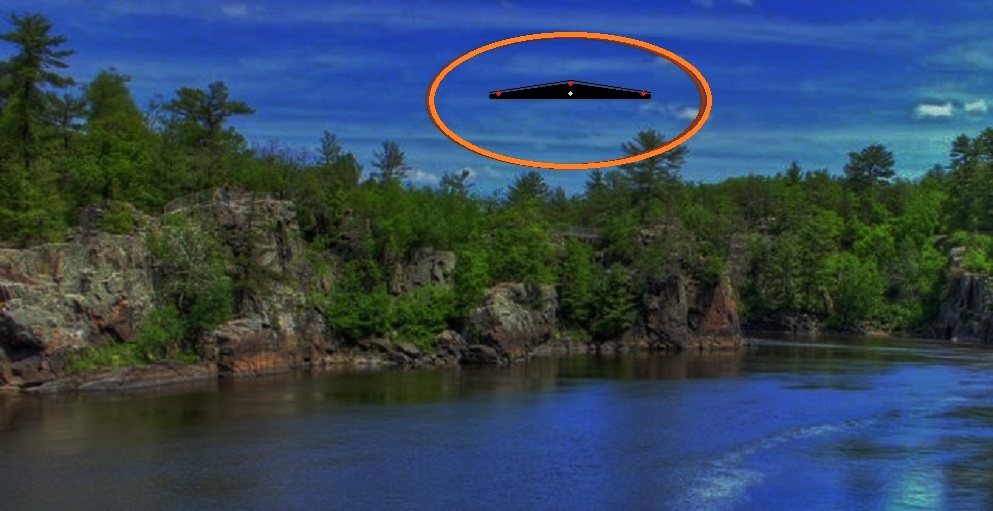 On September 27th, 2016 I was driving home from work down a road along the river at approximately 8:20 pm when I saw two blue lights that flashed yellow and then blue again, consistently and I also saw a solid red light that did not flash or go off, and noticed that I was seeing a black triangular aircraft across the river.  The next thing I knew, it was directly above me so logic tells me it flew across the river, however I do not remember witnessing an actual flight path because it happened so quickly. The craft was about 2.5 cars large, solid black with lighter grey geometrical lines on the underneath, along with a circle in the center of the under-part.  It was shortly after concealed by the treeline so I continued my drive to the ATM at the bank about a mile and a half straight ahead. Once I left the bank, I saw the craft again directly in front of me, but down the road a little way.  I was already going in that direction to go home and the craft went in the same direction so I essentially followed it. I passed my subdivision to continue to see where this craft was going. I proceeded to follow it for about 3 minutes when all of a sudden there was a flash of white light inside my car to my right eye, as if someone in my passenger seat was taking a picture of me with a flash (however, I was alone in my car), and then the craft was completely gone.  It was absolutely nowhere to be seen and it was a clear night, stars everywhere. No other planes or objects in the sky. There were people out and about walking, running, enjoying the evening and NO ONE seemed to even look up at it or notice it.  However, a friend of mine who is a First Responder also saw the craft separately from me seeing it. There have been no reports in the media of a drone or military maneuvers in my area, however I do live just miles from a Navy Base and there are a total of 4 military bases in our greater area.  NOTE: The above image is CGI.