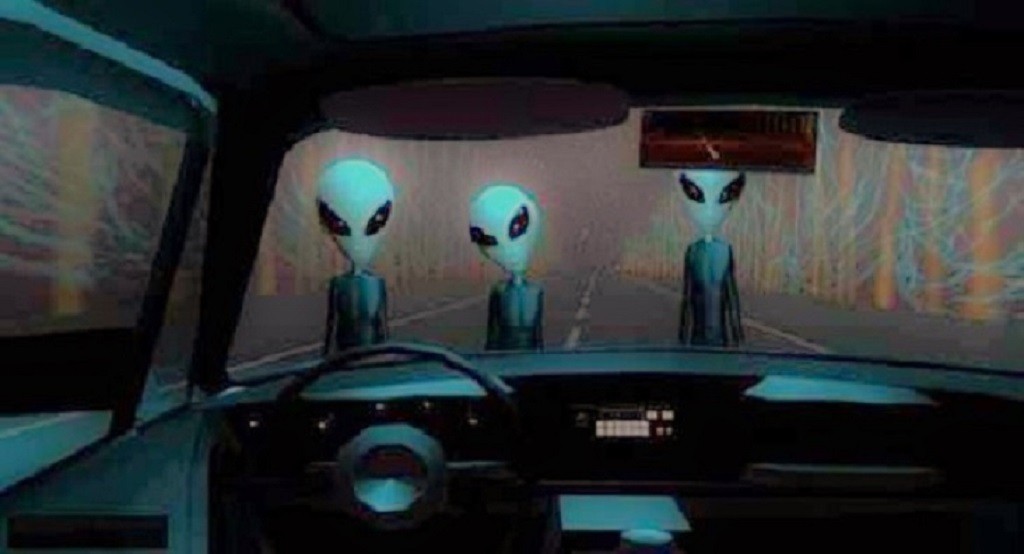 James Townsend,  a Long Prairie, Minnesota radio announcer, had a close encounter with a UFO and three “creatures” about 7:15 p.m. on October 23, 1965, on a blacktop road about four miles east of Long Prairie, as he was driving his 1956 model car around a curve in the road.  The announcer for radio station KEYL said that as he came around the curve, he saw an upright, rocket-like object straddling the road.  It was about 30 or 40 feet high and about 10 feet in diameter, “and seemed to be resting on legs or fins,” he said.  “My car engine stalled, the lights and radio went out, and I slammed on my brakes.  I stopped about 20 feet in front of it.  My first thought was to knock it over with the car so I could have some evidence, but the engine was stalled.  Then I got out with the idea of trying to push it over by hand.  “When I got to the front of my car, three creatures that looked like individual tin cans on tripods, and were six inches tall, came from behind the rocket.  They didn’t have eyes that I could see, but I knew they were looking at me.  I stopped.  I didn’t have any desire to get closer.  There was no sound—just dead silence.  It seemed like ages, as we looked at each other.  Then they went up into the rocket, which had a bright colorless light glowing out of the bottom.  There was a loud hum.  The rocket went up and disappeared.  When the light on the bottom went out after it was in the air, my car radio and light came on—and my engine started without having to touch the starter.  Townsend said his car has an automatic transmission, and he had placed the selector lever in “park.”  Townsend, a non-drinker (“I don’t believe in it as a Christian.”), said his heart was pounding and his legs “were like rubber.  I drove 90 miles an hour back to Long Prairie to report what I saw, but I wondered if people would believe me.  I was sure of two things—the rocket (it towered above the trees along the road) was a spaceship of some kind, and the three objects that came out of it were creatures like nothing else in the animal world I have ever seen.  They definitely were not people as I know them.”  Townsend said the rocket ship took off, looking “just like a flashlight that is turned on and then lifted up from the table with the light at the bottom.”  Several hunters in the Long Prairie area claimed to have seen a strong light above them that lit up the ground that night.  Other hunters reported seeing a lighted object circle around and around over their farm.  NOTE: The above image is CGI.