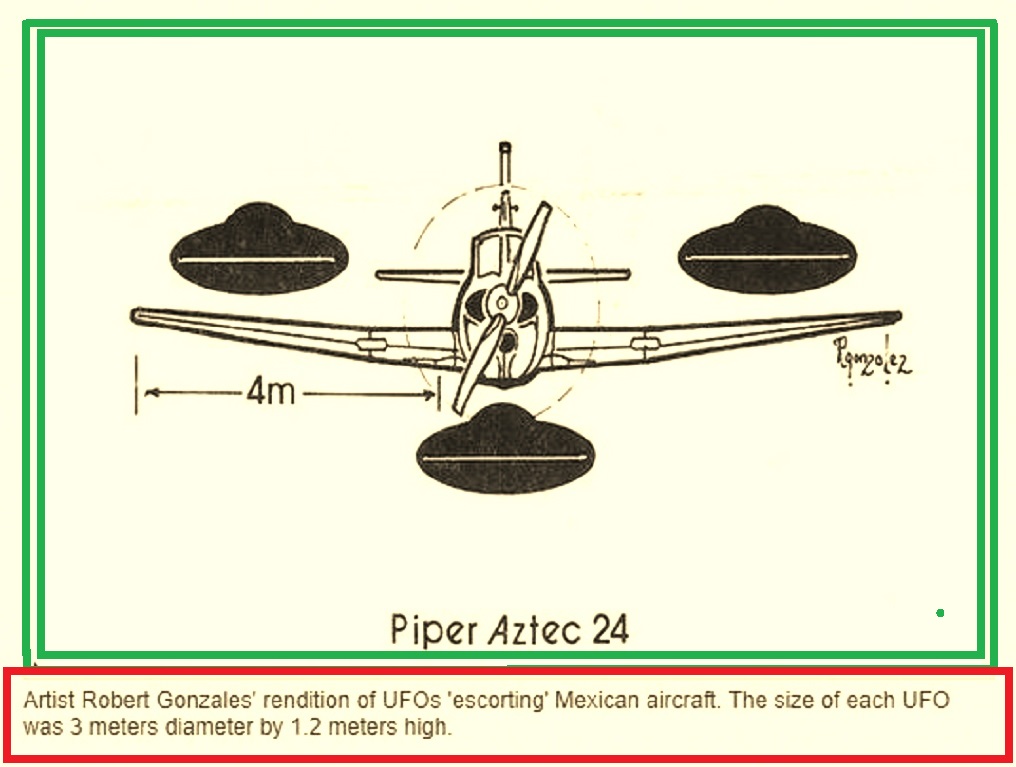 Carlos took off, nevertheless, at 10:30, without having his breakfast. He climbed his little plane to 13,500 feet but conditions were still bad so he climbed to 14,500 where he found a clear blue sky and continued on his return trip to Mexico City.  Arriving in the area of Tequesquitengo, Carlos decided to lose altitude in order to make visual contact with Lake Tequesquitengo and verify his position, instead of depending on his instruments. When he got down underneath the cloud cover, ground mist and fog blocked his view of the Lake. Then things began to happen.  When he looked from the left (he had been gazing through his left side window) to the front he became aware of something on his right and glanced in that direction and was shocked to see an object with the appearance of two plates joined together at the rim with a cupola which had what seemed to be a little window and an antenna on top. It was positioned 20 centimeters above the surface of the wing and about 1 1/2 meters from the Piper’s cabin. (See drawing by Staff Artist Robert Gonzales.) A glance back to the left revealed another object of the same description in the same position above the left wing.

Center Mexico: Take note extra alfa union, give me your position and your situation. We are contacting competent authorities and (here interrupted by Carlos again)

Carlos: The aircraft is out of control.

At this point, Mexico City International Airport closed its runways to traffic and prepared for the expected emergency landing. The objects continued maintaining position on XB-XAU, exerting complete control over the aircraft.  The “Mayday” or emergency call was received at 12:15 p.m. on Saturday, May 3. The control tower contacted Ignacio Silva la Mora (Carlo’s uncle), an authority on aircraft, who was put in touch with Carlos via radio to analyze the problem and help with landing preparations.  When Carlos had reached the Ajusco navigational fix, the UFOs had elevated the aircraft from 15,000 feet (the altitude while over Tequesquitengo) to 15,800 and then, one by one, they left. First the object over his left wing elevated until it was over the cabin, then above the object on the right wing, and then these two flew off and were lost to view in the direction of the Popocatepetl and Iztaccihuatal volcanoes. The controls of the aircraft were immediately normal and Carlos regained control.  Carlos then attempted to lower the landing gear, circling Mexico City International Airport eight times, in radio contact to ascertain if he was successful. Finally, after 40 minutes of circling while he worked on the control column with a screw driver, he managed to lower the wheels and landed at 1:34 p.m. on the grassy area between runway 5 right and 5 left where emergency vehicles, including firemen and ambulance, were waiting.   After landing, Carlos was taken to the Airport Clinic where he was thoroughly examined and found to be normal and fit.  NOTE: The above image is the witness drawing.