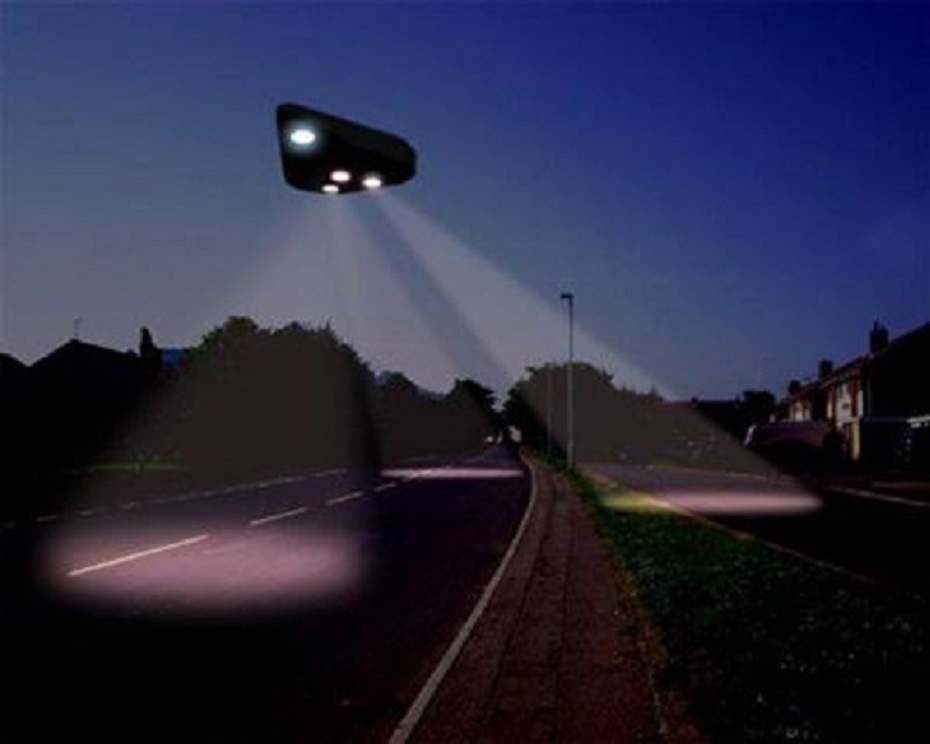 An enormous UFO was seen by at least 200 people within five miles of downtown Pittsburgh, Pennsylvania in early March — and some observers who got a close look said the object was as big, or bigger, than a football field. Glenn Ricci and Claire Gallery were parked by a reservoir in Highland Park overlooking downtown Pittsburgh, five miles away. Ricci “saw a large object come out of the downtown area.  It  came over  the reservoir  and just  stopped.  Claire recalled:   “I   was frightened … it was right over us.” Ricci continued: “The underbody appeared to be a dull gray color and appeared to have a steel grating. The middle of the object seemed to be a cylinder or cone protruding from the base. Inside this cylinder were three triangular lights with a fourth one in the middle. They just kept going on and off in sequence …” When Claire said, “I wish they’d come closer,” a brilliant light ray “came shining down.” Ricci said, “It lit up the car and it lit up the ground.” Humming “like a turbine,” the UFO, after several minutes, moved slowly away and disappeared. The next night witnesses reported another large UFO over the Pittsburgh area. “It would have been the size almost of a football field,” recalled Dr. Edward Pesyna, a physician who saw the object at 9:45 PM. “What really attracted my attention was the beam — the spotting beam. There seemed to be a ray coming down from the undersurface of the lights, just sort of scanning in a random fashion.” The local UFO organization alone received 150 calls on the objects and “90 percent of these had the same general description. “During the week of the 19th, Bruce Buffer of West Malibu, California, was on his way to work about 4 AM when he noticed a bright circle of light above him. It seemed to be moving upward but it disappeared rapidly. Then as he got into his car, he heard a low rumbling muffled sound. “I can only describe it as a low muffled power sound, and with it there seemed to be vibrations of some kind,” he explained. “Then right above me, I could clearly make out a triangular-shaped vehicle about the size of two 747’s. It seemed very low, not more than three or four thousand feet. The vehicle traveled very slowly, like a helicopter hovering above, and as I watched it veered out over the ocean toward Point Dume …” Buffer said the object had an aura of light all around it, but there were two green lights and one red light on the points of the triangle. He estimated that he watched the object from 5 to 7 minutes.  NOTE: The above image is CGI.