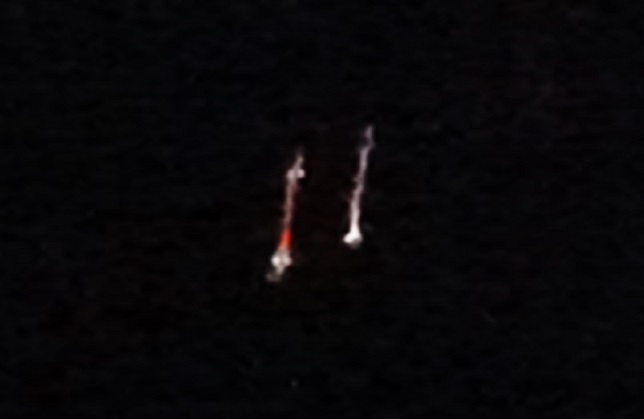 INCREDIBLE PHOTO OF AN ALIEN CRAFT OVER OKLAHOMA

We were driving south along I-35 outside Purcell, OK when the object appeared in the sky in front of our vehicle. Object appeared to be a straight object with two white lights one in front and one in the back. It began performing aerial stunts and making patterns in the sky mostly figure eight patterns.  My daughter tried taking a picture but the object at this point was to far in the distance. One of the lights blinked out.  The remaining light started to blink as it moved out toward the east and hovered out of our view. About 40 minutes later while still traveling south along I-35 just south of Pauls valley, my daughter had a strange look on her face. I asked if she was ok. She said yes but had what she described as a rush of panic when she looked up at me. I noticed her face had a look of almost shock.  I looked outside the drivers window to the east to see an sphere object with a white light almost like a window with a red arch above the white, hovering right along side the car. The moment I noticed it, it shot out in front of the vehicle back toward the south and changed shape to a triangle with 3 lights, 1 white 1 red and 1 blue. At this point the object again started performing aerial stunts and making patterns before changing shape again to a solid light and moving back east at this point. It was close enough my daughter was able to get photos. It changed again once it slowed down back to the triangle shape and started hovering out of our sight.