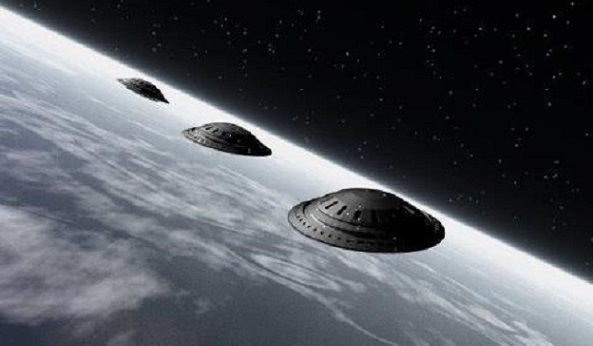 One of the most powerful U.S. senators in modern history actually eye-witnessed two UFOs while on a fact-finding trip through Russia in 1955, and the U.S. government kept the sightings a secret for more than three decades.

The incredible encounter is detailed in 12 TOP SECRET CIA, FBI, and Air Force reports-and declassified in 1985. Those startling reports reveal that Senator Richard B. Russell, Jr. (D-GA), then chairman of the Armed Services Committee-was on a Soviet train when he spotted a disc-shaped craft taking off near the tracks.

He hurriedly called his military aide and interpreter to the window and they saw the UFO, plus another one that appeared a minute later. The astonished trio reported the sightings to the U.S. Air Force as soon as they were out of Russia.

“The three observers were firmly convinced that they saw a genuine flying disc,” says an Air Force Intelligence report, dated October 14, 1955, and classified TOP SECRET at the time.

Senator Russell served 38 years in the Senate. He was its senior, and one of the most influential senators at the time of his death in 1971. He was chairman of the Armed Services Committee from 1951 to 1969, and unsuccessfully sought the Democratic Presidential nomination in 1952.

The mind-boggling documents detailing his UFO encounter were made available by the Fund for UFO Research and its chaiman, Dr. Bruce Maccabee. Several key documents were obtained by the group through the Freedom of Information Act.

“These long secret documents are of major importance because they show for the first time that one of the most powerful U.S. Senators witnessed and reported a UFO,” said Dr. Maccabee.

The Air Force Intelligence report says Russell and his two traveling companions spotted the UFOs on October 4, 1955, while traveling by rail across Russia’s Transcaucasus region.

“One disc ascended almost vertically, at a relatively slow speed, with its outer surface revolving slowly to the right, to an altitude of about 6000 feet, where its speed then increased sharply as it headed north,” the report states.

“The second flying disc was seen performing the same actions about one minute later. The take-off area was about 1-2 miles south of the rail line.

” Russell “saw the first flying disc ascend and pass over the train,” and went “rushing in to get Mr Efron (Ruben Efron, his interpreter) and Col. Hathaway (Col. E. U. Hathaway, his aide) to see it,” the report said.

“Col. Hathaway stated that he got to the window with the Senator in time to see the first (UFO), while Mr. Efron said that he got only a short glimpse of the first. However, all three saw the second disc and all agreed that they saw the same round, disc-shaped craftas the first.”

The Air Force report was written by Lieut. Col. Thomas Ryan, who interviewed Senator Russell’s companions in Prague, Czechoslovakia, on October 13, after they arrived there from Russia shortly after the sighting.

In his report, Col. Ryan called the sightings “an eyewitness account of the ascent and flight of an unconventional craft by three highly reliable United States observers. He added that Col. Hathaway led off his account of the sightings by saying: “I doubt if your going to believe this, but we all saw it.” Senator Russell was the first to see this flying disc we’ve been told for years that there isn’t such a thing, but all of us saw it.”

CIA documents show that the agency later interviewed the three eyewitnesses in the Russell party and also a fourth person, unidentified in the reports, who had seen the UFOs. An eyewitness, whose name was blacked out on the CIA report prior to its declassification, said one of the UFOs “had a slight dome on top” and also a “white light on top.” The edge of the disc was glowing pinkish-white, he added. The UFO rose “vertically with the glow moving slowly around the perimeter in a clockwise direction, giving the appearance of a pinwheel.”

Interpreter Ruben Efron told the CIA that visibility was excellent. As one UFO approached the train, he said, “the object gave the impression of gliding. No noise was heard and no exhaust was heard, and no exhaust glow or trail was seen by me.”

After the encounter, Senator Russell told the men with him: “We saw a flying disc. I wanted you boys to see it so that I would have witnesses,” according to the CIA documents.”

And an FBI memo, dated November 4, 1955, also discusses the sighting and admitted Col. Hathaway’s testimony “would support existence of a flying disc.”

Dr. Maccabee, of the Fund for UFO Research, believes that Senator Russell and his group never publicly revealed their incredible sightings “because they were no doubt advised not to talk. These documents provide startling new evidence that UFOs exist.”

Mr. Tom Towers, in his January 20, 1957, column, ‘Aviation News,’ for the Los Angeles, CA, Examiner, printed the contents of a letter from Senator Russell, which was in response to a request for information about the sightings in Russia.

Mr. Towers had originally contacted Senator Russell’s office by letter with the request that he be given permission to “break” the story.

The Senator wrote: “Permit me to acknowledge your letters relative to reports that have come to you regarding aerial objects seen in Europe last year. I received your letter, but I have discussed this matter with the affected agencies of the government, and they are of the opinion that it is not wise to publicize this matter at this time. I regret very much that I am unable to be of assistance to you.” The letter was dated 17 January, 1956. NOTE: The above image is a rendering.

1 thought on “UNITED STATES SENATOR WITNESSED A UFO OVER RUSSIA”