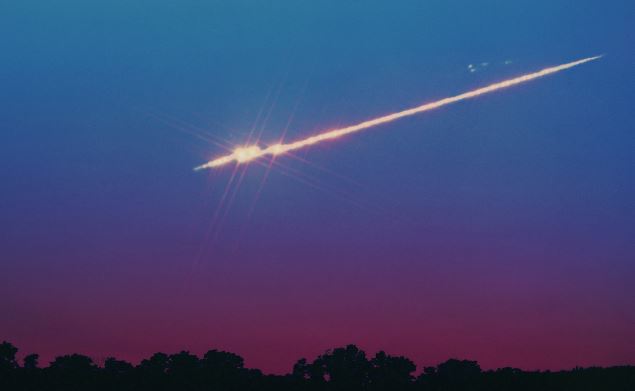 INCREDIBLE UFO WITNESSED OVER THE FLORIDA KEYS
AUGUST 2013…MARATHON KEYS FLORIDA
My two friends and I were sitting on the 3rd floor balcony on Tuesday night just watching the night sky and talking. Our view was over the Atlantic Ocean facing Cuba and it was a quiet night. All of sudden a bright light appeared in the sky right in front of us. At first we thought it was a meteor.  It was traveling very slowly to the north. As it moved in an even path we saw a tail of sparks begin to form looking much like those of a welder’s flame. It appeared to be one big slow moving vehicle but as it continued in a northerly direction and passed us it began to separate and we could see one large ship and two smaller ones following behind. There was no sound and it didn’t arc like meteor.  Spell bound we watched it for several minutes until it disappeared.  Although we had cameras and cell phones a few feet away inside the condo, none of us wanted to stop watching long enough to get a shot.  But we are convinced it was a UFO.  And no, we weren’t drunk. We know what we saw.
There have been reported sightings of a similar craft in California and Arizona.  Now that’s what I call a vacation memory!   It wasn’t the first time I saw a UFO but this one was atypical.  After the crafts passed out of sight we call went on line to see if anyone else reported it. We figured someone in Marathon or another part of the upper Keys must have seen it but we couldn’t find any other reports. One of my friends found a reference to flame throwing UFO’s sighted in California and Arizona but not much else.  I drew a picture (but I am no artist) and I will try to post it to you.   What made this one unusual was that it first appeared in the dark sky as a bright flash of light. We thought at first it was a meteor. They it began to move from a position of about 2 o’clock (in the south end of the sky) in a northerly directions headed up the Key. As it began to move, we could see what looked like sparks trailing behind in a huge fireball that seemed to span the distance of a 100 yard, as big as a football field.  It was moving very slowly and there was no sound.  When it didn’t arc and begin to fall out of the sky like a comet would, we knew this was something else entirely.  As it passed in front of us, it appeared to be comet like, meaning one ball of flame but as it headed north we saw it separate into three “ships”.  The one in front was larger and flying slightly ahead of the other two smaller ones. The whole thing took about 2 –3 minutes before it passed out of sight leaving us spell bound. NOTE: The  above image is a rendering.
KEN PFEIFER WORLD UFO PHOTOS AND NEWS
WWW.WORLDUFOPHOTOSANDNEWS.COM
WWW.WORLDUFOPHOTOS.ORG
SPECIAL THANKS TO THE WITNESS ELISSA BENTSEN AND
MY FRIEND AND SOURCE FAHRUSHA AT
http://fahrusha.wordpress.com
http://www.fahrusha.com

4 thoughts on “INCREDIBLE UFO WITNESSED OVER THE FLORIDA KEYS”