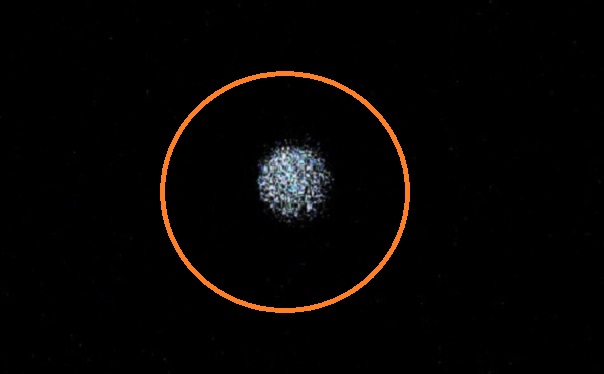 Bright shining object, approximately the size, maybe slightly smaller, of my thumb nail at arms length. Object/light hovered in one spot for about 2 minutes, then disappeared when camera auto-focus beam went off. This sighting just happened last night. I was at the computer and my wife was doing the dishes.  We both kept hearing an unusually loud, low pitched, rumbling sound, going overhead.  We could not tell, from inside if the sounds were jet engines, or the wind. I had gotten up and looked outside on three earlier occasions to see what it was, or if I could see something flying overhead. There was, in fact, a constant howling wind all evening. But, there also was a steady stream of jets, aircraft, or something overhead.  I couldn’t see them because of the cloud cover, but I could hear them, that is, apart from the wind.  I could hear the Doppler pitch change in the engine sound as they passed by.   There are no regular flight paths over my place at this time of day, and very few at any time of day. There also are no major airports nearby. We have two community airports, Potsdam & Massena, each about 12 miles from my location; one due West, one due North.  Fort Drum is approx 80 miles southwest of my location. There were no stars or moon visible, there was a low cloud cover, and it was quite windy.  I could not tell from inside if the sound I was hearing was the wind or a jet engine which is why I kept going outside and checking. Just before I went outside for a fourth time (and this is where it gets a little weird), I said to my wife: “I keep getting a sensation like I am being watched, or stared at;” like when someone is standing behind you and is staring at you, and you can almost “feel” it. The thing is, she was off to my left, in my field of vision, doing the dishes; and we live alone.  I went outside and this time there was a single very bright white light, shining like a star over my neighbors barn, who happens to be a Detective with the NY State Troopers, and who was outside with his family observing and commenting in an excited way about the light/object.  It wasn’t reflecting like the moon.  It was shining, sparkling, or emitting light, and so bright, I could only see light, I could not see an object, just a source of light. I was looking slightly North of West, up at an angle of approx 35° from the earth.  The object was slightly smaller than my thumbnail extended at arms length.  There were no other lights in the sky.  I live in the country, there are no streets lights or other forms of light pollution. The object must have been quite low in the sky, because there was a low, visible cloud covering/ceiling last night. I asked my wife to get my camera, a Canon Power Shot S2-IS (it gets a little weirder here). As I pulled the camera up to my eye, I was thinking I was going to have trouble finding the object in the viewfinder, shooting in total darkness and all. I was surprised to see the object, right there in the view finder, no problem at all finding it.  I zoomed in some on the object and was I thinking; “Ill take this picture, and then Ill take another with the flash up/on and see if the object responds to it.” I had the auto-focus on, and when I squeezed the shutter to focus, of course it shot out that green laser beam. Then, just as, perhaps slightly before, the shutter went off (I have the camera set to make a sound like an old 35mm) and there was a slight delay in the shot because the camera had set the exposure to 1/8 of a second.  Right at that instant, just after I zoomed in, and just before the camera locked on and froze the image, a split second before the shutter went off, I saw in the view-finder the object change from a bright shining white light, to a blue sphere with white light shining through the blue with a blotchy sort look.  Its kind of looked like one of those pictures of the surface of sun, except it was blue and thats when the shutter went off.  That is what the picture shows. I can’t say if the object actually changed in appearance, or if it was the “zooming” that caused me to see it differently.  My wife didn’t see what I saw, the change in the objects appearance from bright a bright white light, to blue spher.  She had just turned to shut the front door, it was chilly out, and when she turned back, she asked; “where did it go?” I could not see the object in the viewfinder anymore, it seemed to just disappear.  I didn’t even think I got anything on the exposure. I pulled the camera away from my eye to see if I could re-find the object without the camera. There was a glowing in the cloud cover where the object had been. I could hear my neighbor and his family saying to each other; “Did you see that?  Everyone sounded quite excited, so were my wife and I. It looked as if the object was now above the clouds and illuminating them from above. Although, I could not see anything of the object anymore, or make out any shape, just the clouds slightly illuminated from above where the object had been.  KENS NOTE:  The area around Fort Drum in New York has a history of strange orbs and objects.