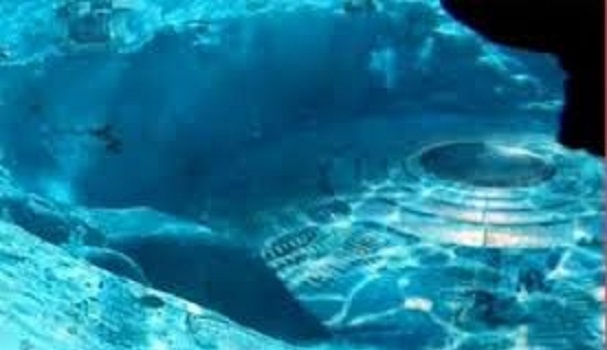 In late August of 1981, between five and six pm, three men and two women were driving west from a mountain area slightly east of Hamilton, Ontario, Canada and south of Lake Ontario. The weather was clear and sunny. At a point, roughly half way through Hamilton, one of the occupants in the car saw a strange craft through the window of the car, and by their exclamation, alerted the others in the car to the sight. The craft was a red-orange, domed saucer shaped object, which appeared solid, with many yellow lights radiating from the base or bottom. In answer to the question of size, she (the witness of this report) answered that the diameter would be roughly 3-4 car lengths, and 3 car heights for the height of craft (also a rough guess). Her closing remark on this was “Not a small craft”. Indeed it wasn’t, as I measured two cars belonging to family members that are of “medium size”. They average out to 15’ 7” in length and 4’ 6” in height. This would put the UFO in the area of 46’ 9” to 62’ 4” in diameter and 13’ 6” in height. Slightly smaller than the B‑25 Mitchell bomber of WW2 … “Not a small craft !!!” Its speed and altitude could only be expressed as that of an aircraft on approach for a landing near an airport. It was on a course roughly parallel to theirs. Due to the curving road it was first sighted to their right (north) and then over them and then to the left. Its course was roughly north-northwest.

While driving the radio had been on and, while in the vicinity of the object, was now getting static (EM effects), which the driver turned it off to avoid further distraction. Someone in the car at this point had said, “Follow that UFO”. All being in agreement, they did precisely that. Although the road had many curves, the craft was seen to move in a straight line towards Hamilton Harbour. As it approached the Harbour, it appeared to slow down, and then angle itself downward and gently entered the water. At the point of entry (rough approximation), it can be seen on the nautical chart that the water depth at this point is 7 or more meters (23 feet) and gets deeper in the direction of Lake Ontario, so the UFO had at least 10 feet to spare. Therefore a craft of 13 feet in height could be covered by water. There are many cases of UFOs submerging in shallow waters.  The witness reporting this case states that the UFO had passed them and was at a distance away when it entered the Harbour, and does not recall any major disturbance of the water as it went in. After it had entered the water the group lost sight of the area for a period, due to the topography. Overcome with curiosity, the group went to the waterfront to see what they could. From a city map of Hamilton, the distance from the “mountain” area and the waterfront is roughly 12 km or 7.45 Statute miles, and could have been reached quickly. They remained in the area for approximately seven hours, wondering if the UFO would surface, whether any aircraft would attempt a search of the area, and delving into various possibilities of the event. Between 12:20 and 1:00 am, two objects were seen to partially emerge and remained in that position through the point that the group finally left. The question of these two objects being submarines came up and has been done away with, as information from the Canadian Navy states that it does not use the few subs they have in any of the Great Lakes. Another possibility regarding the emerging objects might be the tide going out and revealing some fixed underwater object. This portion of the sighting is the most speculative and should not detract from the sighting of the craft and its actions. NOTE: The above image is a rendering.