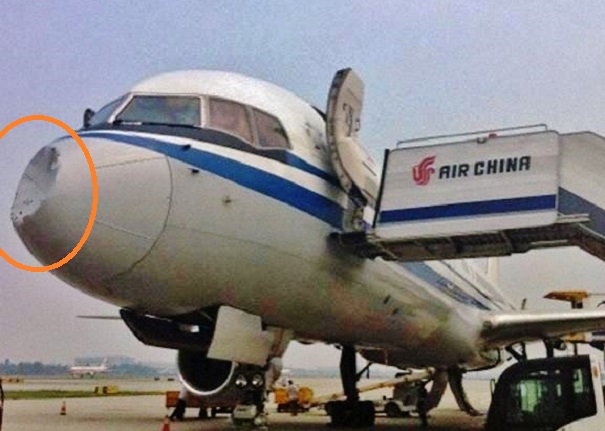 A passenger jet was forced to make an emergency landing after a mysterious mid-air collision with a ‘foreign object’ at 26,000 ft. severely dented its nose cone.  The plane was climbing over China when a large bang was heard from the front of aircraft.  The pilots of Air China flight CA4307 left Chengdu on the morning of June 4, headed for Guangzhou contacted the control tower of Chengdu airport, requesting an emergency landing due to “mechanical failure” and returned to Chengdu for an emergency landing. No one was hurt in the mysterious incident.  The pilots reported a “mechanical failure”, but these images taken by a passenger tell a very different story. In these images the damage to the airplane is visible. The front of the Air China Boeing 757 had been pushed in and scratches and scraped paintwork The nose of the aircraft shows evidence of the collision, the question here is, with what did this Boeing 757 collide at 8000 meters?  China Daily newspaper reports the damage was due to a collision with a bird. However, a bird strike was ruled out “due to a lack of blood, feathers or any other bird remains.” Besides, the plane’s elevation was too high for birds.  There are speculations that the collision was caused by a UFO or a drone strike.  It is not the first time. There are dozens of reports of near misses between UFOs and commercial aircraft.  Just last week, it emerged that three passenger jet pilots saw UFOs above Britain’s Scientology headquarters in West Sussex on their approach to Gatwick Airport.  The pilots reported seeing two flat, silver discs during their approach into Gatwick Airport. Some of them reported the discs flying within 100 feet of their aircraft.  Air traffic control says they did catch six UFOs on radar, and that soon after the radar signals appeared, they suddenly vanished.