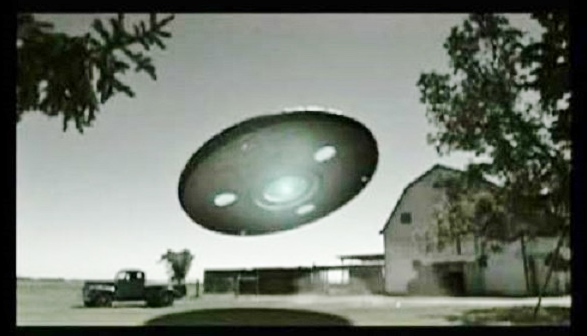 In his chapter for “UFOs,” French Major General Denis Letty reports on the case of Air Force Captain Jean-Pierre Fartek, then a Mirage III pilot, who had seen a UFO in 1979.  Captain Fartek’s case was most unusual, because the sighting did not occur while he was flying, but had taken place at his home in a village near Dijon, during the day.  He and his wife witnessed an oscillating object hovering low to the ground, in front of a row of apple trees. General Letty met with them at the location, and wrote this in his notes during the interview: “The object looked like two reversed saucers pressed against each other, with a precise contour, a gray metal color on the top and dark blue below, with no lights or port-holes.” The clarity and precision of the shape of the object left no doubt that it was something solid and physical.  He provided many more details, as Letty describes.  The similarities between the object described by the three Captains — Guerra,Schultz, and Fartek –- in different countries and in different years, are both suggestive and fascinating.  Captain Fartek submitted a report to the Air Guard Station at the base, and he was instructed not to talk about what he saw. Letty writes that Fartek, was very upset by this experience.  “He told me when we met that the sighting called into question his perception of what were then called ‘flying saucers,’ because he had never believed in them,” Letty says in his chapter.  “Now, he acknowledged to me that after seeing this craft he could no longer doubt their existence. Hearing his testimony, I too did not have any more doubt about the reality of the  Phenomenon.  In fact, taken together, I found the Farteks’ testimony so disturbing that I have been preoccupied by the UFO problem ever since. In 1996, after he became a Major, Commander Fartek was interviewed for the COMETA study which I initiated, and even then, after seventeen years, he was still visibly shaken by what he saw.”  NOTE: The above image is a rendering.