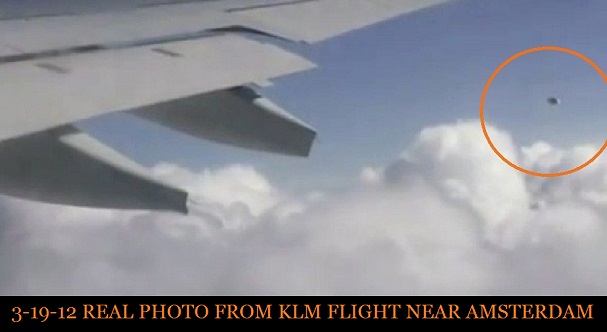 I was on a commercial airline flight from Tennessee to Southern California on February 4, 2014. I was looking out of the port-side windows, observing the blanket of cloud cover. I then saw a black object moving in roughly the opposite direction of the aircraft I was in. The object was flying a bit higher, but within a few hundred feet of the altitude of my aircraft.  We had reached cruising altitude, which for a domestic flight may have been approximately 20,000 feet. I estimate the object’s distance as approximately 1,000-2,000 yards away from the aircraft I was in.  The objects shape was rounded; not a sphere, but with width and height that were approximately the same length. The object had rounded details that protruded both from the sides and from top to bottom. The object was very dark black in color.  At first glance I thought the object was another plane moving the opposite direction. As I continued observing the object I saw that it was moving at a pace that was unusual.  It was at that time I also mentally noted the objects black color and unconventional shape. It was moving in a very straight line at a fast pace, one that did not seem at all consistent with a commercial or known military aircraft. The pace of the object surprised me and made me observe it more closely.  At this time, after observing the object for less than 10 seconds, I looked down at my phone briefly, for only a second or two. I then looked immediately back to where the object had been and it was nowhere to be seen.  When I had looked down, the object was not about to pass behind my place and out of sight. I was startled to see that the object was no longer in the sky, and leaned forward to look out of the window farther towards the front of the airplane, where I could look farther behind us. The object was gone.  NOTE: The above real photo is from a KLM flight to Amsterdam on March 19, 2012.