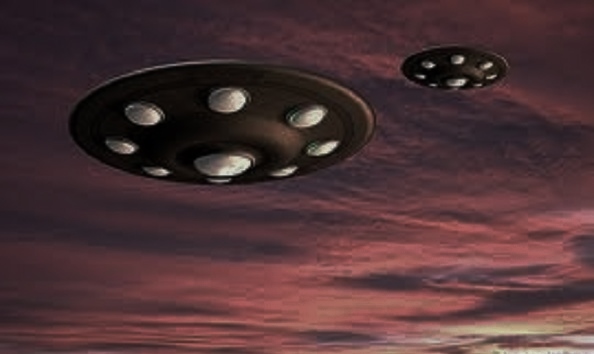 Family dog had to go out back at 10.50 pm plus or minus a couple of minutes. Had my 5 million candle power light with me when taking her out at night due to coyotes and bobcats. Shined my light around the back yard as I always do and once I was looking in the Northeast direction I noticed almost right away (3) craft with (4)large bright orange/ reddish lights each, traveling from the Northeast, traveling directly over my back yard heading Southwest towards Phoenix. Thought, in the first couple of seconds, that the lights were a type of aircraft, but realized quickly that these were not our aircraft. The (3) craft were in loose formation, not exactly a perfect triangle, but close together. Each craft, on the underbelly, had (4) bright Orange/red glowing lights forming a square about the size of a (2) car garage.Estimated these craft to be at about 1500 feet to 2500 feet above ground level. As they traveled directly over my back yard I noted that there was no noise from a propulsion system, completely silent. Crafts were moving faster than a balloon or blimp but much slower than a plane and were in a controlled flight pattern. Went back inside home and pulled wife out of bed. When she saw them she asked what they were. I commented that they were Unidentified flying objects. She told me to get my camera and get some pictures. Ran in and got my camera. Took quite a few pictures and pictures do show orange/red glow. One of the (3) crafts sprinted ahead of the other two crafts and turned off its lights when it got close to Phoenix. Pictures that I took show (2) Orange/red glowing orbs. After approximately 6 minutes the last two crafts were so far to the south west that we couldn’t see the lights anymore. My wife is my witness and the pictures that I have show (2) glowing orange/red orbs.Both, my wife and I were amazed by the sight of these objects and had a hard time believing what we had seen. But did get it on my camera. Not good enough to show any detail but does show (2) glowing orbs. NOTE: The above image is a rendering.