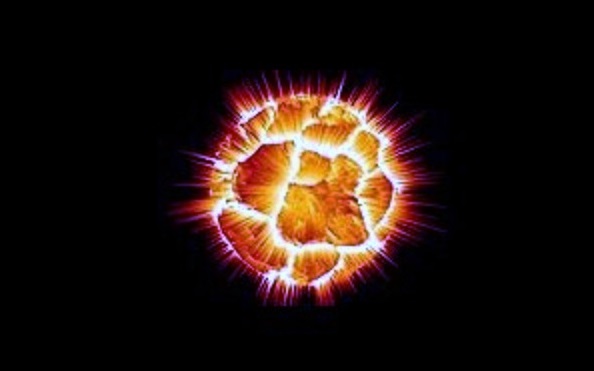 Multicolored fiberoptic looking sphere.The object first caught my attention, because the sky was so clear, you could see everything.The object seen first looked like an extroardnarily bright star, just larger. After paying closer attention to it, we realized these beautiful colors all over the object. I then retrieved my binoculars for a closer look and what we saw was just amazing, and so vivid. There was no haze, no aura, and it just remained in the same spot for about a half hour until it slowly(at least slow to the naked eye) began moving south. Also to clarify the location, it was east of where we were and we were looking to about a 45 degree angle. The sphere then paused again and seemed to remain in its new location, for the remainder of the sighting. I had viewed it through the telescope also which made it that much more clear, only to reveal a spherical shape just completely covered in this constant changing, almost electrical light. It was blue,purple,red,yellow, green, and it just kept cycling through these colors over and over again. To be more precise on the shape, it looked exactly like the big Epcot center ball (with the same outer texture or paneling) in Disney World, just bigger and luminescent. I also found it pretty peculiar that at no time during this sighting was there even a trace of any other aircraft in the sky, and the air traffic is usually constant. NOTE: The above image is a rendering.