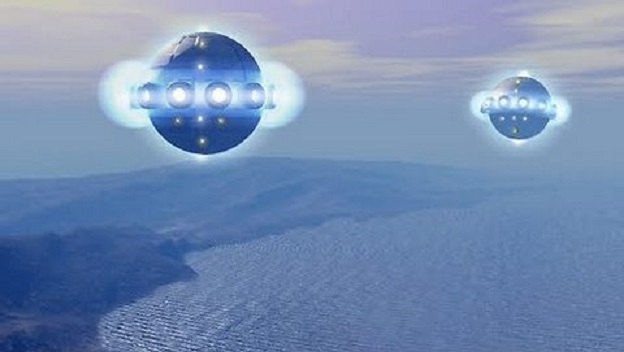 I was in my bedroom watching Sherlock on my laptop when a bright object caught my eye out of the window. I observed it for about 30 seconds. It was a very bright light with a searchlight emitting from it. The searchlight varied as it would scan the ground for a few seconds then it would point to the clouds. I ran out side to get a look at this object. As I looked at it I could start to see an object that look like a diamond with 2 red orb like objects orbiting the diamond. The object brightened with no searchlight from it, I realised the searchlight was on me. I started to hear a low hum. It was the metal railings surrounding me vibrating the searchlight then swung around and pointed towards the sky. I could see the light cast on the clouds. The object then continued on it path start along to North west then it shot off. I went back inside and when I looked out of the window at the top of the stairway the object was low on the horizon hovering there gradually getting dimmer. I took out my phone and I recorded the object for a few seconds til my battery died out.  The object is still on the horizon as I write this nearly 2 hours after the encounter. I had a very head ache after the sighting I’m not sure if it is linked to the searchlight on me or if it is just coincidence. I’m not sure if it is alien or if it is just so weird weather stuff all I know is it is not a helicopter there was noise and a helicopters isn’t diamond shaped. I saw video from west africa were a diamond shaped craft fixed a beam of light on a village and it like transfix them. It could be linked I don’t know.  I have had two other encounters prior to this. Both was a single green orb like object performing acrobatic maneuvers such as moving in a triangular path in the sky and making angles at such high velocities that it would kill a human with the amount of g force.  NOTE: The above image is a rendering.