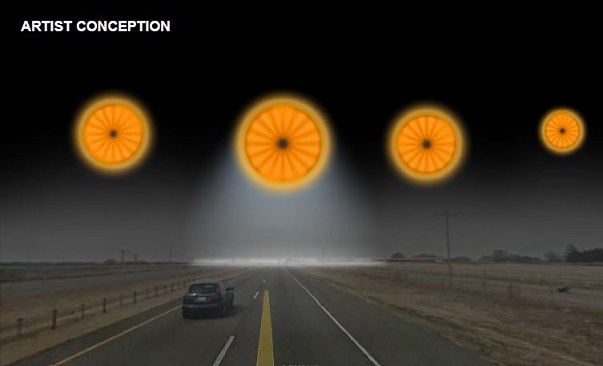 Over a rural road, six horizontal lights appeared low in the sky for a few seconds and disappeared, silently.  My husband and I were driving on County GG near Coloma, Wisconsin and at approximately 5:50 PM we saw 6 horizontal, evenly spaced lights appear in the sky. They appeared low in the sky and reminded us of stadium lights but in a horizontal pattern as I described. We both asked, “what is that?” and they immediately went dark. Within seconds, we stopped the car, turned off the engine and got out to listen. There was no sound. We expected a plane, helicopter or something, but it was silent.  This is a rural, county road. There are no trees, etc. or other visual obstructions where we were. The only other traffic was a truck 1/4 mile ahead of us that appeared oblivous to this. There are no towers, city lights or nearby airport.  My husband and I have lived in this area for 30 years. We are both retired teachers. I am 51 and my husband is 62 and have never seen anything like this. This is the first time I have ever reported something like this.

I was driving home from work the evening of Wednesday, November 16, 2011 on County Rd D through the White River Marsh located between Berlin and Princeton WI. It was very dark and I was about halfway through the marsh, I don’t drive very fast because the marsh road is very curvy and I was approaching some “S” curves when I noticed a car parked alongside the road with its lights on. This is rare in the marsh so I was busy watching the car closely as I drove by because I had thought they had hit a deer. I believe I kept watching the car in my rear view mirror because I can’t believe I wouldn’t have seen “it” sooner. As I rounded the 3rd curve, veering off from the Rustic Road, I looked straight ahead and there it was. Straight in front of me, eye-height looking out my front windshield, the only way I can explain it was that I didn’t have to bend to see it above my car. The object was just above tree height. The object/row of lights appeared to be positioned over the abandoned farm area near the next curve. I cannot believe the people in the house on the corner did not notice it. There are only about 4 homes in that area of the marsh. I saw a row of rectangular shaped lights that were illuminating the object above and below the lights but not the complete object. It appeared to be circular in shape, maybe grayish in color. At first I thought and may have even said it aloud, “Oh my goodness, do hot air balloons fly at night?” “No, not with lights,” I said. It was that close to me at first, the ‘texture or surface’ of the object appeared to have the “look” of a hot air balloon or something similar to the :Airbus” surface. The big Wisconsin balloon flies low and close by in the summer sometimes, so that is why I thought it had a similar look to the surface of a balloon, but not colorful more of a matte gray. The illumination on the object from the lights reminded me of the haze around a streetlight when it is misting.  By this time, my mouth is wide open I am saying, “Oh my God!” over and over. I’m sure I was barely going 10 mph but for the life of me I don’t know how I made it around the next curve without going off the road because I never took my eyes off the object. Within seconds of first viewing the object, I could no longer see the object illuminated around the lights; all I could see is the row of vertically rectangular lights. I assumed later that the object was moving from me. It appeared to be backing further away but off to the left of its original position. The curve of the roads veers to the left and the object was still pretty much in front of me. The lights were like vertical windows at night, framed by black darkness, I believe about 7 or 8 lights, and the “row” of lights was slightly curved which seemed to support the circular shape I had first saw. The sky was completely dark with the exception of these lights. Then all of a sudden the lights went out but not like someone had switched off a light switch but more like someone was pulling a curtain or drapery shut over each window, from my right to left and then the lights were gone. Right after they were gone a small flash appeared that looked exactly like the flashing lights of an aircraft flying at night except it only flashed once and then all I saw was complete darkness. I kept watching in the area where I had last seen the lights to see if I would see movement or a shadow or something but I did not. I kept driving slow and watching out the window to my left almost the entire way home. I did notice a lot of jet-noise that night and also remembered hearing the jets flying at night the 2 nights previous to Nov. 16. 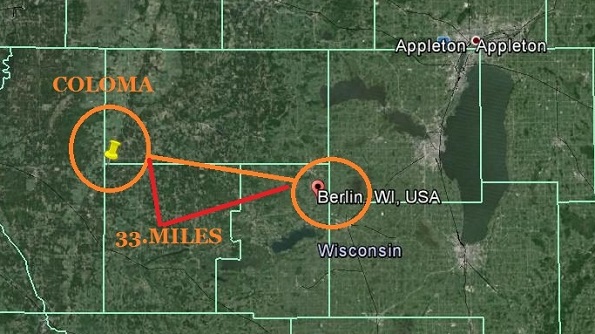 It was strange because I met another car about ¾ mile on a straightaway in the marsh parked alongside the road with its lights on as well. But I think this car would have been too far away to have seen it. I am wondering if the first car that I had met parked alongside the road had seen it. It was only about ¼ mile from where I saw the object. The entire time I was driving, more like crawling while I am watching the lights/object I am reaching in my purse for my phone to try to capture a photo. Never did get it out. But I kept staring at it to get a clear picture in my mind and immediately came home and drew what I saw. At first I drew the row of lights with the light framing black rectangular darkness but when I also drew the row of lights with the darkness framing the vertically rectangular lights that appeared to be closer to what I saw. I’ve scanned my drawings the first drawing is closer to what I remember. I told my husband and my son when I got home. They really didn’t react too much. Later it was bothering me, I felt I should report what I had seen. I did place a call to what I thought was the Green Lake County sheriffs dept but instead I had dialed the Green Lake City police dept. As I explained it to him he kind of laughed, said he had not heard of any other reports but would mention it to the sheriff’s dept if he spoke to someone. He did say I could call them to report it. The next day I told a friend of mine at work of the sighting and he encouraged me to contact the UFO center. NOTE: The above image is a rendering.

513 thoughts on “NIGHT OF STRANGE ALIEN LIGHTS OVER WISCONSIN”