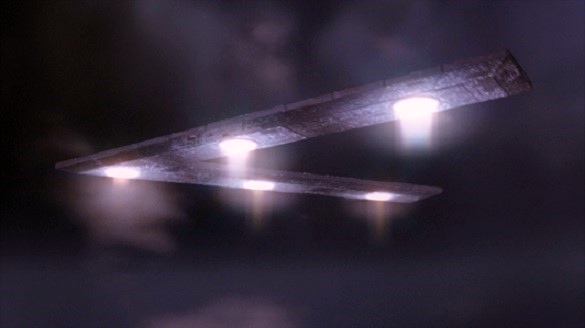 It happened quite a few years ago now, I’d say around 16 years if I had to guess. I was around 8/9 at the time and like most 8/9 year old boys, I had been sentenced to an evening of being grounded for something stupid I’d done.  I had been in my room and playing on my games console when my mum had passed and heard and advised me that being grounded isn’t something you’re supposed to enjoy, before taking the console away. So to console myself I went to my bedroom window to watch my friends playing outside. My window looked out over our garden, which had an alleyway behind it, and then a row of buildings beyond that.  As I was looking out at my friends playing whatever they were playing, I noticed movement above the roofs of the buildings at the alleyway. Assuming there was a spider or something on my window, I looked up to get it.  Instead of a spider I witnessed a large triangular craft passing above the buildings. Not directly above, of course, but it appeared that way because of it’s position in the sky. It looked to be far away and still was very visible and very clear…and very large. I’d estimate it was approximately one mile away and was still as big as my finger is now.  I observed the object for around 10 seconds. It moved in a perfectly horizontal line, and rotated to the right as it went at a speed of a around 1 full rotation per ~3 secs. It was very dark coloured, almost black. And the only way I know it wasn’t totally black is because it had 2 thick darker lines running across its width. There were also darker lines in between these lines but they weren’t very clear. Could have been markings, could have just been recesses in the surface.  As I watched it I’d been totally frozen, until after watching it for about 10 seconds I screamed and ran downstairs. And wouldn’t go back up no matter what, mother’s wrath be damned!  I have no idea what it was I saw, I’ve never seen anything like it since then.  Oh, and as a slightly interesting aside, a week or two after this we had some very strange occurrences in the house. Firstly, my sister developed an imaginary friend that she never spoke to when we were around. This friend spent a while apparently just playing with her, but after a fortnight or so she began to wake up screaming in the night. She’d have marks on her and would literally stay up all night so she didn’t have to go to sleep on her own. It got so bad that she had to be moved first into my mum’s room and then into mine. For some reason, after moving into my room, and having me tell her many times that if he comes back she should tell him to go away and to ignore him, it seems he did.

My mum has always been a believer in ‘other stuff’ and was of the opinion that if you just ignore anything bad it will go away. Which is a philosophy I have found very useful in life, believe me! Any attention is good attention for that stuff.
We had a few incidents of switches flicking themselves off or on, once a TV (and we had a very old TV…weren’t very rich) had the volume dial turned all the way up while my whole family was in the room. Through that we just tended to ignore as best as we could, and eventually it all stopped.  The second and more terrifying (to my mind anyway) occurrence was this: around the time my sister had her imaginary friend, I began to experience very vivid dreams. And all to do with non-human entities. At first the dreams were “relatively” okay. I’d see beings in the garden looking up at my window. And these weren’t the typical Greys. They looked more like a head attached to a pair of giant legs with two small arms beneath the chin. Never saw any full facial details so can’t comment on that.  After a few of those came the bad dreams. And they were full of Greys! I dreamed they came into my room and were apparently examining my sister. I wanted to stop them or say something but couldn’t move, and whenever I thought about what I could do one of them would straighten up and look into my bed (we had bunk beds), and begin to examine me.  I had one or two of those, then they got really weird. I’d dream that I was standing outside my house in the street, in just my pajamas. And I was terrified. I don’t know why but I was terrified. I was always carrying a ship in a bottle, something I’ve never owned, and would look up into the sky. Across the sky a number of huge, and I mean HUGE winged figures would fly by at ridiculous speeds. As the last ones started to pass, dozens and dozens of craft would begin to pursue. Craft of all shapes and sizes. And then the dream would end.  So yeah. That’s it. I have no idea if my sighting was linked to the following events, but it is what it is. I remember everything that happened at the time that was connected, and I don’t think I’ll ever forget it. And the feeling of utter helplessness watching my little sister go through that stuff is another thing I will never forget.  NOTE: The above image is a rendering.

2 thoughts on “TRIANGLE CLOSE ENCOUNTER AND ABDUCTION IN NOTTINGHAM ENGLAND”