Deputy Sheriff Dale Spaur and Mounted Deputy Wilbur ‘Barney’ Neff had left their scout car to investigate an apparently abandoned automobile on Route 224. Spaur described the sighting in these words:  “I always look behind me so no one can come up behind me. And when I looked in this wooded area behind us, I saw this thing. At this time it was coming up . . . to about tree top level. I’d say about one hundred feet. it started moving toward us…. As it came over the trees, I looked at Barney and he was still watching the car . . and he didn’t say nothing and the thing kept getting brighter and the area started to get light. .. . I told him to look over his shoulder, and he did.  “He just stood there with his mouth open for a minute, as bright as it was, and he looked down. And I started looking down and I looked at my hands and my clothes weren’t burning or anything, when it stopped right over on top of us. The only thing, the only sound in the whole area was a hum . . . like a transformer being loaded or an overloaded transformer when it changes. . . .  “I was petrified, and, uh, so I moved my right foot, and everything seemed to work all right. And evidently he made the same decision I did, to get something between me and it, or us and it, or whatever you would say. So we both went for the car, we got in the car and we sat there….”  As they watched, the UFO moved toward the east, and then stopped again. Spaur picked up the microphone and reported to the dispatcher. At this time, the object was about 250 feet away, brilliantly lighting up the area (“It was very bright; it’d make your eyes water,” Spaur said.) Sergeant Schoenfelt, off duty at the station, told them to follow it and keep it under observation while they tried to get a photo unit to the scene.  Spear and Neff turned south on Route 183, then back east on Route 224, which placed the object to their right, and out the left window. “At this time,” said Spaur. “it came straight south, just one motion, buddy, just a smooth glide . . .”and began moving east with them pacing it, just to their right at an estimated altitude of 300-500 feet, illuminating the ground beneath it. Once more the UFO darted to the north, now left of the car, and they sped up to over 100 mph to keep pace with it. 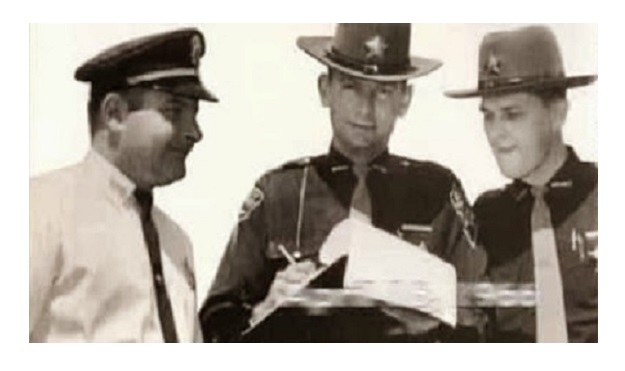 As the sky became brighter with predawn light, Spaur and Neff saw the UFO in silhouette, with a vertical projection at its rear. The object began to take on a metallic appearance as the chase continued. Spaur kept up a running conversation with other police cars that were trying to catch up with them. Once when they made a wrong turn at an intersection, the object stopped, then turned and came back to their position. Police Officer Wayne Huston of East Palestine, Ohio, situated near the Pennsylvania border, had been monitoring the radio broadcasts and was parked at an intersection he knew the Portage County officers would he passing soon. Shortly afterward he saw the UFO pass by with the sheriff’s cruiser in hot pursuit. He swung out and joined the chase. At Conway, Pennsylvania, Spaur spotted another parked police car and stopped to enlist his aid, since their Cruiser was almost out of gas. The Pennsylvania officer called his dispatcher.  According to Spaur, as the four officers stood and watched the UFO, which had stopped and was hovering, there was traffic on the radio about jets being scrambled to chase the UFO, and “. . . we could see these planes coming in…. When they started talking about fighter planes, it was just as if that thing head every word that was said; it went PSSSSSHHEW, straight up; and I mean when it went up, friend, it didn’t play no games; it went straight up” (Transcript of taped interview with Dale Spaur).  The Air Force “identified” the UFO as a satellite, seen part of the time, and confused with the planet Venus. Under pressure from Ohio officials, Major Hector Quintanilla, chief of PROJECT BLUE BOOK, had an acrimonious confrontation with witnesses and refused to change the identification, although it was pointed out to him that they had seen the UFO in addition to Venus and the moon at the conclusion of the observation. Major Quintanilla also denied that any jets had been scrambled.  NOTE: The above image is a rendering.

KENS NOTE:  This case file was apparently used for the incredible movie ” Close Encounters of the Third Kind ” .  I have also heard that the scene of the mother ship landing somewhere in the mid west was also a true account.

1 thought on “COPS CHASE ALIEN CRAFT THROUGH OHIO AND PENNSYLVANIA”