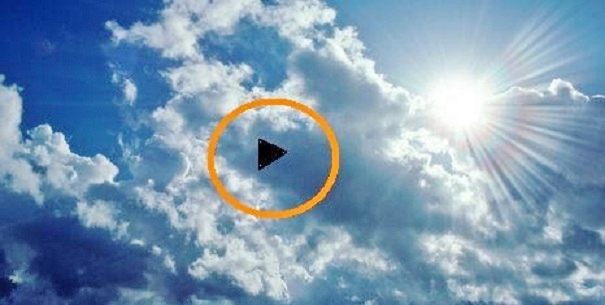 My wife and I (we are business marketing writers) were doing some yard work this afternoon around 2:30 PM, when I noticed an odd object that appeared to be drifting, like a balloon, from east to west in the southern sky. The sky was partly cloudy with good sunshine.  At first I thought it was a balloon because it was moving so slowly; but then I realized that it was drifting AGAINST the prevailing west wind. I pointed it out to my wife, who agreed it looked like a dark-colored balloon. She went into the house and brought my binoculars for a better look.  Through the binoculars, I saw a distinctly black, triangular object — it looked rather like a bat-kite, which seemed reasonable to me on a gusty day like today, and it would explain the thing moving AGAINST the west wind.  Once I tentatively identified the object as a high-flying kite, I estimated the “kite” was maybe 6 feet wide and 400 feet in altitude, which would not be out of the question for some kite enthusiasts.  However, I then noticed a dark tether hanging straight down from the black triangle attached to something like an angular, light brown box that didn’t look aerodynamic at all. The box-like object was about one-quarter the size of the black triangle. This made me question my kite theory.  Then, as I was watching it, the whole assembly disappeared into the clouds — I actually watched it go into one of the cumulous clouds that were moving west to east.  That blew me away, because it meant the craft could NOT be a mere 6 feet wide and 400 feet high… it must have been more like 5000 FEET altitude, or more, in order for it to disappear into a cloud. This means it had to be a LOT bigger than a kite.  If the thing was actually 5,000 feet in altitude, that’s about 13 times HIGHER than I had estimated, which would mean my estimation of its physical dimensions was way off, also. It had to be much larger than I estimated.  The craft did not reappear from the clouds. The entire sighting lasted about 2 minutes and only crossed, perhaps, 25 degrees of the sky, very slowly, from east to west. We were looking due south, probably 45 or 50 degrees above the horizon.  NOTE: The above image is a rendering.

26 thoughts on “HIGH FLYING BLACK TRIANGLE SPOTTED OVER THE CAROLINAS”