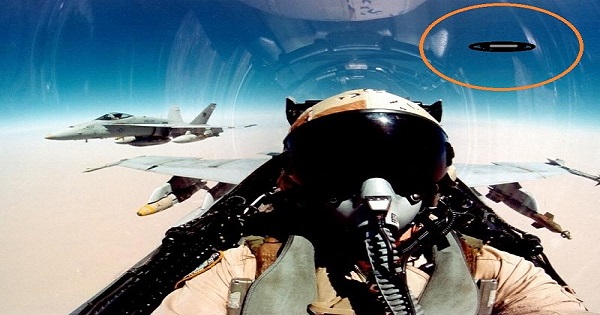 I was on the grocery store parking lot placing my groceries in the trunk. I heard a fighter plane type sound approaching us but didn’t see anything. About 3 seconds later I see a fighter plane coming from the west heading northeast. The fighter plane was traveling very low and very slow. If I had to guess I would say 2,000 feet in altitude. I told my son and my friend “look it’s a fighter plane”. We watched it for about 8 seconds as it flied by directly above us. Then a large gray object approached the fighter plane from the rear at a very fast speed. The object had no navigation lights like the fighter jet had. It only had 4 very dim bar lights between the main body and the wings. I thought it was going to crash into the fighter plane. It slowed down suddenly about 3 plane lengths away behind the fighter plane. It followed the plane for about 5 seconds. Then the object gained speed, made a hard right, and then a hard left, cutting off the fighter plane.  The object could be seen more clearly when it turned because it banked left. Then you could tell that the object was shaped like a stingray without a tail. It was gray and about 12 times larger than the fighter plane. 4 dim bar lights on each side where the wings joined the main body. The wings were not fixed. The wings rippled at opposite rhythm like a stingray. The object took off heading northwest very fast. The fighter plane gained speed and continued northeast. 2 seconds later another fighter plane coming from the west followed the path as the first plane but traveled at a faster speed.  NOTE: The above image is a rendering.