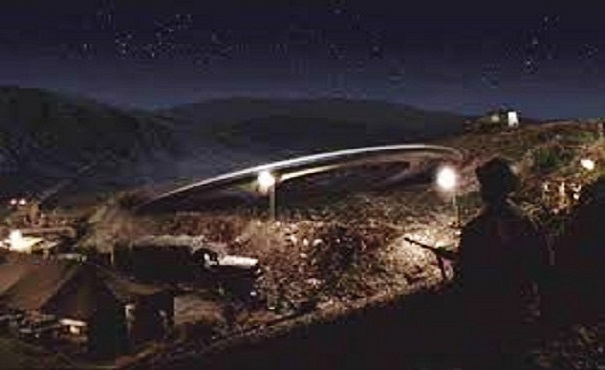 Residents of Barstow, CA are claiming there was an unidentified flying object (UFO) landing on a local highway on Saturday, Dec. 12, which has been sparking internet forum postings. The sighting was called to our attention by a reader Eric.  A relative of a witness reported on an internet forum God like productions.com about the sighting Saturday at 1:20 pm EST:  “My sister just received a call from her stepson from Barstow who attested that a UFO landed on one of the major highways there (presumeably Interstate 40 or 15). The UFO was surrounded by a team of black cars.   Witnesses are questioning whether this is a Government UFO or the ‘real thing.’ My sister is waiting for a return call from her stepson. I’ll give more details as they arrive.”  Today the same person, maya2012, wrote back to the forum after hearing more information from the sister:  “Her nephew called today. Apparently, the UFO landed (or crashed) off off the road early in the morning when it was still dark outside.  The police and black cars arranged themselves so that their headlights were facing outward, making it difficult for people to see what was happening. My nephew’s coworker took two pictures but they came out somewhat blurry. He stated that you could partially see the UFO in one picture.   My nephew doesn’t have the pictures, his coworker does. We’re still trying to get them. A large military transport was brought in to take the UFO back to the nearby military base.”  Whether the UFO was an alien spacecraft or a military plane is unknown.  If the UFO claims are true, there will probably be other Barstow residents reporting the sighting soon since it was on a highway.  It should be interesting to hear what other people from Barstow have to say about the sighting.   In the city of Barstow, California on December 12, 2009, residents see a low-flying UFO streaking across their neighborhoods.  The pre-dawn event included several witnesses seeing the object cross a highway and either land or crash in a deserted area.  Some residents decided to follow the path of the object and find out where it was and what had happened to the object.   Soon, they have visitors; a number of SUVs come speeding by, heading straight for the UFO. The residents come close enough to the unknown object to see the SUVs encircling the UFO.  Their headlights were pointing away from the object, blinding the onlookers from getting a good view of the scene. Soon, a flatbed truck arrives.  About 10 minutes later, the flatbed begins to leave the scene, accompanied by the SUVs. The residents see a tarp-covered object about the size of a VW bug.  Soon, the parade of vehicles is gone, leaving the residents at a loss as to what the object was and how the incident had transpired.  Reports were made to local law enforcement and the Air Force, but no information was gleaned from the sources.  NOTE: The above image is a rendering