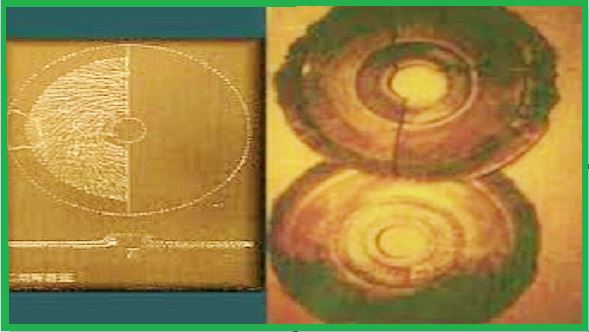 They wanted to tell us who they were and what brought them here.  They left a message for future generations, but the alien artifacts they left behind were hidden from the public!  This story is known under a lot of names and it is one of the most covered-up stories in the history of extraterrestrial-human interaction.  The discovery took place in 1938 on the border between China and Tibet.  An archaeological expedition, guided by the Chinese professor Chi Pu Tei discovered rows of graves in the mountain caves of Baian Kara Ula.  The skeletons were remains of a different race of human beings. The skeletons were very fragile and measured only little more then four feet (1,30 meter). Their skulls were large and over developed but these were not remains of apes. Additionally, the scientists also discovered interesting rock drawings on the cave’s walls.  They depicted beings with round helmets accompanied by the drawing of the sun, moon, earth and stars, connected by groups of pea-sized dots.  There was even much more to find in the prehistoric cave.  Half buried on the dusty floor, the archaeologists found a large round stone disk, which looked like a Stone Age gramophone record.  There was a hole in its center and a fine groove, spiraling out from the center to the rim.  Its age was determined to be around 10,000 – 12,000 years old!  In all, 716 stone disks were found. Each disc was 9 inches (22.7 cm) in diameter and 3/4 inch (2 cm) thick. Each disc also had an exactly circular 2 cm hole in its center.   Further analysis revealed a groove-like marking, which turned out to be a continuous line of strange carved hieroglyphs.   The object was a ‘record’ of alien writing composed of microscopic characters written in a language never encountered before.   For more than 20 years many experts tried to translate the alien writing, but without any success.  In 1962 Dr.Tsum Um Nui, a Chinese scientist, was finally able to decode the message of the mysterious artifacts.   The result was so bizarre that the Prehistory Department of the Beijing Academy, China refused to publish Tsum Um Nui’s findings and even talk about them as well.  Dr.Tsum Um Nui continued his research and was finally allowed to publish his work. The shocking message of the Dropa stones was written by beings who called themselves Dropa. 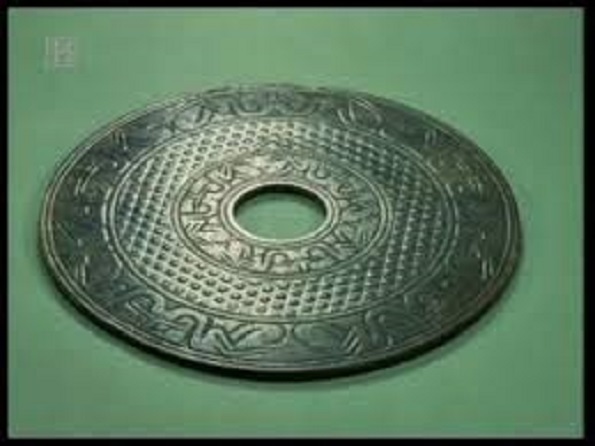 The stone disks told the story of the Dropa people, space travelers from a distant planet. Their spaceship crashed in the inaccessible region of Baian-Kara-Ula mountains. The occupants of the spacecraft, the Dropa, found refuge in the caves of the mountains.  With no possibility to repair their destroyed spacecraft or building a new one, the Dropas could not return to their home planet. They were stranded on Earth. Despite their peaceful intentions, the Dropa were misunderstood by members of the Ham tribe who were occupying neighboring caves and who hunted down the aliens and even killed some of them.  A translation of one of the passages says: “The Dropa came down from the clouds in their aircraft. Our men, women, and children hid in the caves ten times before sunrise. When at last they understood the sign language of the Dropa, they realized that the newcomers had peaceful intentions…“  In 1968, the Russian philologist, Dr. Viatcheslav Zaitsev published the extracts from the stone-plate story in the Sputnik Magazine. Zaitsev conducted more research and came up with really interestings results.  Physically, the granite stones contained high concentrations of cobalt and other metals, a very hard stone indeed. It would have made it difficult for the primitive people to carve the lettering, especially with such minute characters.  When testing a disk with an oscillograph, a surprising oscillation rhythm was recorded as if, the scientists said, they had once been electrically charged or had functioned as electrical conductors.  Have any of the Dropa people survived? At the time of the discovery, the cave area was still inhabited by two tribes known as the Khams and the Dropas, both extremely odd in appearance.

READ THE REST OF THIS AMAZING STORY ON   http://www.messagetoeagle.com/dropa.php#ixzz32qfCSI91