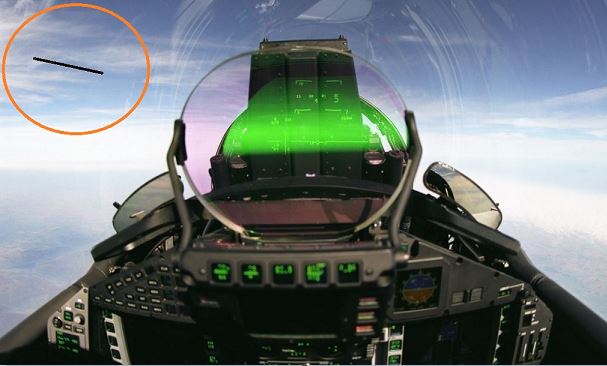 As my son and I were walking Stella, our dog by the River Yare, and having sat down on the seat overlooking the river situated south of Bland Road, Norwich, Norfolk, UK, we were commenting on the fighter jets roaring above our heads at great height. They looked very small when out of the white clouds. I said they were not playing war games, but chasing a UFO radar contact for I knew from previous experiences how to tell the difference.  We watched a fighter plane go into a great pulled about fluffy white cloud that was unlike the other clouds and I said to my son to watch for a UFO to come out of the other end of it.  There was a short gap between that cloud and the next and as we watched it a craft of huge size materialized within the gap.  It was not moving but just hovering. It was in a shape hard to describe as it seemed that the outer edge was not so visible, but it was long like a cigar and light metallic green in colour with two bars or rails running along ether side underneath that shone a brighter metallic green.  After around ten seconds or so it dematerialized and a jet fighter came out of the cloud, which was tiny like a fly in comparison to the UFO. We could hear the jets after burners and see them at times going extremely fast, then slow right down and turn as if trying to find it once again.  I got the impression that the UFO was kind of playing games with them. The time of the sighting was 14:20 and the craft was almost overhead and slightly to the east.   I have watched something like this now three times from or near my home, and over the twenty years I have lived here I have seen a few good sightings. Once one has seen them, it becomes a habit to keep an eye on the sky and to learn how to look.  I am sure the RAF would just say what they always say, that they were just playing war games or practicing. However, all three times I have seen these happenings it was over built up areas and the flying was frantic. I’m afraid that I did not have the time or togetherness to get my phone out and take a video or photo, for if I had tried to do that I would have missed the sighing. Next time perhaps!  NOTE: The above image is a rendering.