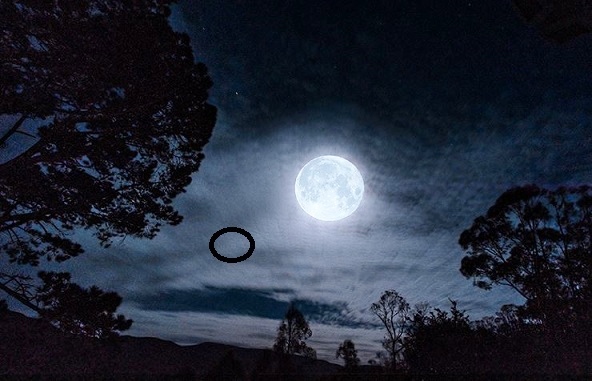 I was on vacation with my family. It was our last night there and we had just finished packing up and we’re all hanging out around the camp fire at around 11-11:30.  I was star gazing as I normally do while sitting at the fire when I noticed a large smoke ring-like object in the sky. At first I thought it was smoke from the fire until I saw that it was a perfect circle and was about 100 yards or so across, I pointed it out to my brother and stepmother and they saw it to.  So we grab one of spotlights we had been using to see while loading and we put the spotlight on the craft and in a blink of an eye it was gone and had moved about 200-300 yards away still hovering at the same altitude.  Once we started lighting about 6 other camps in the area all noticed it as well and did the same thing for the next 2 minutes the craft kept zipping around going from stopped to being 500 yards away in less than a second before it disappeared for good.  As someone who didn’t and believe in UFOs, this kind of shocked me at the time. I remember feeling kind of shocked, but super curious at the same time.  “Why was the craft floating over open desert like that?”  The six camps were the only life for about 45 miles before you hit the main road. Also, “how did it move so quickly; nothing man-made moves like that?” We have some amazing technology, but this was crazy.  Had I not been looking hard for star clusters I would have missed it for sure. I am really just curious to see if anyone on this site was there or had a similar experience out in this part of the desert and could shed some light on what I saw.  It’s been years since it happened, but for some reason I just thought about it again and wanted to look into it.   NOTE: The above image is a rendering

3 thoughts on “MYSTERIOUS RING LIKE OBJECT SPOTTED IN YUMA CALIFORNIA”