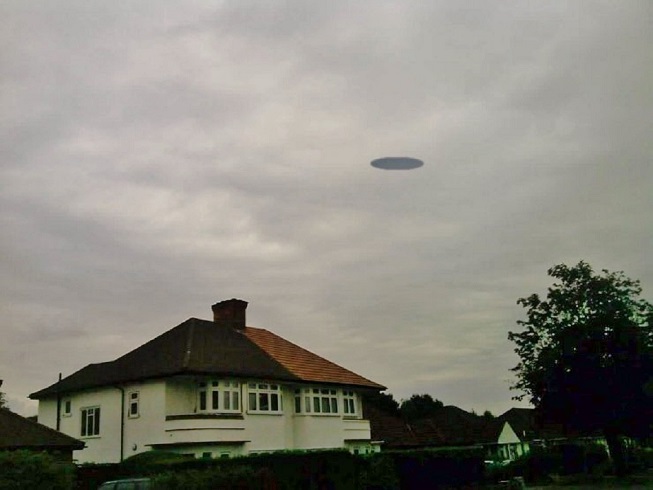 My son was walking home from school on Monday 2nd June 2014 in the vicinity of Eascote near Pinner (North West London). As he walked passed a man and a small girl walking in the opposite direction to him he noticed an object in the sky.  My son observed that the object was a disc shaped and hovering just below cloud level at a distance of up to half a mile from him. He was at first confused by what he was looking at as it did not resemble a conventional aircraft.  He turned around to see if the man had seen it too but the man and the small child had already walked around the corner on to the next street. The time was 4:17 pm.  My son then observed the gray disc-shaped object as it maintained a hovering but stationary position. He described seeing the underbelly of the object and the rim of the object for some 10 to 15 seconds.  He later pointed out to me that it must have been a fairly large object as he estimated it to be at least half a mile away.  He took a photograph of the object with his smart phone camera and continued to look at the disc. My son then observed that the craft then started to change its colour by blotching different areas of its undercarriage to match the cloud around it.  He observed this change of colour for up to seven seconds before the craft completely disappeared from view. At no time during this transformation did the craft move position and neither did it make a sound that he could detect. My son said that he had the distinct impression that the craft was still there but had somehow cleverly masked itself to the naked eye.  Upon witnessing the disappearance but feeling it was still present my son become scared. He rang his mother to tell her what he had seen and then ran the rest of the way home.

25 thoughts on “AMAZING PHOTO OF AN ALIEN CRAFT NEAR LONDON”